Everything seems to be in a state of flux at the moment. By the end of March I shall be retired (early) in line with the government's public sector cuts and this has set all sorts of thoughts running. not least is there's no sense of urgency now and real life won't conflict with other interests - not that  I've ever been particularly interested in real life! I've got dreams of a pretty relaxed routine, combining jobs that need to be done around the house (decorating here and there essentially) and leisure activities which have often had to take a back set when work encroached. So, the hardest decisions I'll have to make in future will centre upon whet to paint next ;O)
As usual, I'm currently concentrating on three bits of work: Sherbourn's Additional (28mm AWI), some Peter Pig Confederates and some 28mm Mongrel Congo mercenaries c.1964, which I don't think are available anymore, but I'm not sure - or all that bothered really.  These last lot belong to the long suffering Mr Crouch who I said I'd paint some up for about 18  months ago!  I've just got round to it as my pangs of conscience got too much to bear, but I'm glad  I waited until I had  the right frame of mind. Why? They're pretty poor castings - lots of mould lines, bad to non existent undercuts and some have been pressed by the master moulding and have become almost like demi-ronde figures; a slight exaggeration, but not by much.
Anyway, very brief update, so here're a few older (Old Glory & Battle Honours) 15mm: 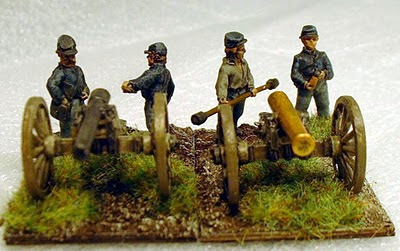