As you’ve probably noticed, for years I've mounted figures for painting on the plastic caps from 'coke' bottles: cost nothing, disposable and keep your greasy fingers off the figures. However, I've recently been having trouble with  my hands and now find the bottle tops hard to cope with - no sense of touch in my fingers, so I'm continually dropping the figures I'm working on. My solution is to join the happy throng who use wine bottle corks – got some new, ‘plastic’ ones from a home brew supplier. They are much easier to grip, but there’s a disadvantage in that they're inherently unstable and much worse when they've got a figure mounted on top. The immediate solution was to bung a piece of Blu-Tac (or another type of reusable adhesive putty!) on the bottom so they grip the painting table, but this is a pain.

The good news is that, when placed flat on the table with the larger holes uppermost, Warbases' Paint Bottle Rack is ideal for holding the corks and with the smaller holes at the bottom of the frame, the corks don't fall through. I bought another rack to house those figures which have been prepped and mounted and are awaiting painting. However, this is far too big to go on my painting table and I needed a ‘sawn off’ version to hold the figures actually being painted.

At Partizan I spoke briefly with Diane from Warbases about the possibility of them modifying their Paint Bottle Rack to become a holder for figures when painting. After a quick exchange of emails and a couple of shots of a prototype Martin had put together (despite my best efforts they understood what I meant!), I ordered a few to be collected at Phalanx last week. They’re about a third the size of the paint rack with the holes more widely spaced to allow me to get my sticky little fingers in and the bottom of the rack is simply a blank plate. Add to this that they only cost £3 each and ‘dead chuffed’ is an understatement. 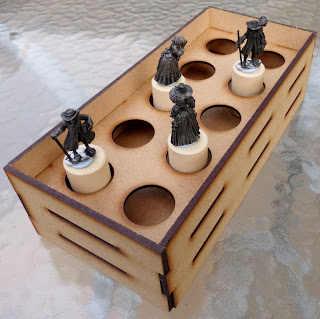 So, what might be described as my handling system for painting 28mm figures has had a revamp. Nothing original, but, to give a quick run down:

Foot figures are mounted on wine corks. These new 'plastic' corks to which you can fix leads with PVA or Blu-Tac look like they’ll last forever.

Horses get fixed (Blu-Tac) to wooden 'Jenga' blocks. They’re not the real thing, but a cheap version from ‘Tesco’ – fifty odd for about a fiver as I remember.

Riders get a small hole drilled in the region of their prostate and superglued to the business end of a roofing clout - they snap out easily and you can simply tidy up the end of the clout with a pen knife. I've got some lengths of timber baton with holes drilled in at intervals to take the heads of the clouts so I can stand the figures up during painting.

For now, 15mm figures are still mounted on ‘lolly sticks’. Not ideal, but more manageable than bottle tops.

Just in case anybody’s wondering, no, I haven’t any connection with Warbases and yes, I did pay for the frames. I don’t actually know Martin or Diane, but I’d recommend their company without reservation. I’ve been using their bases and gaming aids for a while now and I’m happy with the goods and the service. Finally, although the frames aren’t a catalogue item, if you ask them they’ll knock some out for you.
- June 29, 2015 7 comments:
Email ThisBlogThis!Share to TwitterShare to FacebookShare to Pinterest
Labels: Painting, Warbases
Newer Posts Older Posts Home
Subscribe to: Posts (Atom)