Well, another few weeks of mayhem, but at least some headway made in the clear up exercise and a few other jobs bottomed (fence painting and the like.) Finished (but haven't based) the Swabian Baden – Baden regiment. I chose this unit because the colours are pretty boring and so should be a good test for the method. If this was going to produce a respectable unit, a dullish one should be a better test. Another thought was that the officers and NCO's wore carmine red coats and I wanted to see if there would be enough variation between the red of the coats and the scarlet (or 'bright red') waistcoat and cuffs. I don't thin there is a significant difference, so anyone who's thinking of this colour combination (and a lot of regiments had it) might want to consider just blocking in the whole let the same shade of red. I've uploaded photos of an officer, drummer, sergeant and a squaddie to give an idea of the result, which I think is pretty fair and certainly good enough for the table. Just to recap, they've been done , by block painting colours, painting on a coat of Army Painted Strong Tone (done more like a coat of varnish rather than a wash) and then highlight where you think it's needed. The highlight is actually a reapplication of the original shade before the stain. You can go for another shade on top of this, but it's probably gilding the lily and the whole aim is to crash out units, not to be creative. Anyway, here you go; front and back views to give a decent impression: 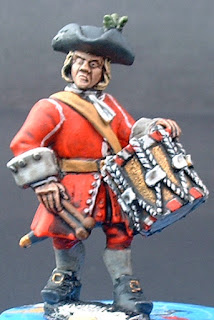 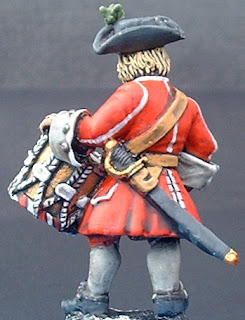 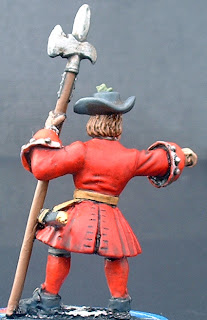 As part of the catch-up exercise, I've used a similar method for two 15mm Napoleonic French foreign battalions, but this time, no highlighting and the use of the good old Ivory Black oil paint and gloss varnish wash. Really fast and very forgiving. This is a useful way of putting 15mm units on the board (I've got well over 2,000 figures to get through here!) and it's so much cheaper than using Army Painter. I've been using the same tube of Ivory Black for years. There's an earlier blog entry about this which will save me repeating myself.
Nevertheless, this churning out of figures is pretty tedious and the French infantry must win any awards going for boring uniforms! So, during one of my periodic bouts of insomnia a couple of nights ago, I grabbed some leads and a paint brush to fill the time rather than killing off emails and reading. The figures were four Woodland Indians (table clearing again), two each from Perry and Conquest Miniatures (not Conquest Games): part of my AWI forces. I must say that the Conquest figures are better sculpts and certainly easier to paint, but I'm not sure where you can get them in the UK now that North Star don't appear to stock them any longer.
The flesh was a problem. I used the Reaper Miniatures' Tanned Flesh triad, but, while the dark and middle shades work well together, the highlight is far too light; too light to form part of a simple triad, in my opinion. So, with four Indians apparently wearing Kabuki Theatre make-up, I had to resort to a wash of Windsor & Newton Nut Brown ink to tone things down (the GW inks were in the loft and I was lazy).
The figures don't represent any particular tribe, but are just a layman's approach to the Iroquois Nation. They're for my wargames forces, not the Smithsonian. 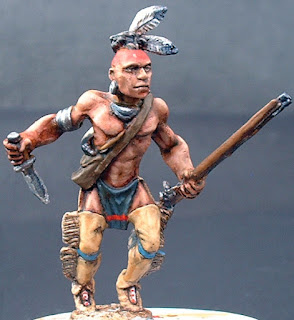 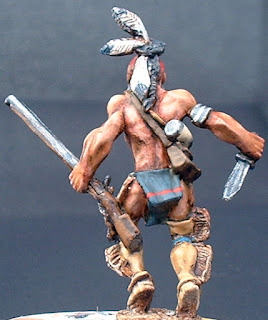 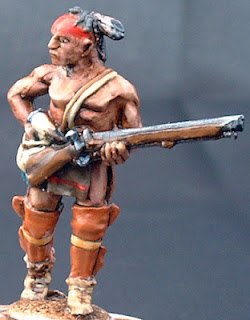 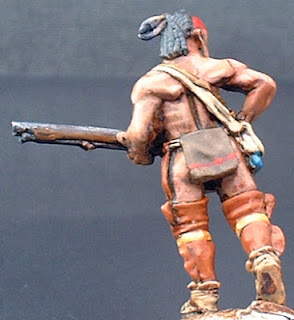 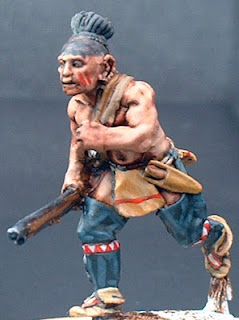 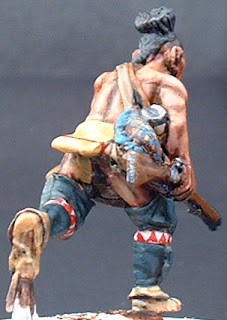 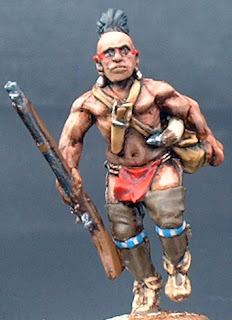 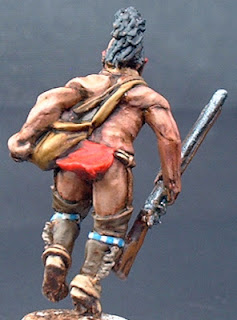