I dunno, call it what you want.

An Englishman, Irishman, Scotsman and a Rabbi walk into a bar and the Rabbi says “Damn, I’m in the wrong joke!” I was going to type “shit”, but I didn’t want to lower the tone.


Anyway, hands are on the up, which is a near miracle, given the amount of plaster dust and God knows what they’ve been subjected to. All good then. About time to squeeze in a bit of lead painting when things go quiet – maybe even today if I’m not seduced by the sun and the birdsong. Out back (as we refer to the back garden) we have had something of a war between a gang of wood pigeons and a trio of ‘nice' birds: a blackbird and two robins. The crunch came last week when the cat from next door but one left one of said wood pigoens in kit form across the road. They’ve not been close since then, but they do gather on the roof of the house opposite trying to intimidate that cat. Consequently, we’re treated to longish periods of birdsong from the blackbird and his great tit and blue tit support band from around five o’clock. The only negative part of this is that I wish they’d learn some new numbers as the same song all day, for days on end gets a bit like the muzac at Tesco’s. If I’m still round in a couple of million years, maybe they will have.


From the odd comment dotted here and there around the blog, some of you may have gleaned that Cloud Base is undergoing some ‘alterations’ as they used to say. Nothing too dramatic, but it’s about time and all that. The upshot has been (and still is) the need to ditch some of the gash we’ve accumulated over the years from a variety of sources. The tally of bin bags transferred to the tip (not including the skip!) is too depressing to admit here, but it wasn’t all our stuff guv. A fair percentage of the tally was stuff that belonged to relatives who’ve since gone west (we’ve got a whole library full of long stories).


A couple of weeks ago, son and daughter were summoned to see if there was anything they wanted to keep – at their house(es) - including things I’ve brought back from abroad and other bits of my junk which might be of use (no, I’m not sentimental). Unsurprisingly, daughter arrived on cue, ready to muck in, but her brother was somewhere in the Dark Peak – the acorn never falls far from the tree. In no time at all, Young Henry had discovered a modest accumulation of boxes, which contained wargaming stuff and, despite threats from his mother, turned up a few bits for himself (mostly junk) and, surprise, surprise, some AB French Napoleonic light infantry that I don’t remember at all. I know where they ought to have been, had they existed, but I didn’t know they actually did exist! No big deal really and not particularly well painted (must’ve been a rush job or just a ‘filler’, I think), but I think they may become one of those fabled ‘magic’ units that can do no wrong on the wargame table and lead charmed lives. So, fair enough, here they are:

Now then, Partizan. Great venue with plenty of light and free parking. Catering good, but probably taken by surprise by the numbers who actually turned up – around 900, I understand, but I might be wrong there. I had a good time of it and was much relieved that it was such a success. I have a soft spot for Partizan as it saw the birth of the old Wargames Mongrels (many of whom you do know as they’ve grown to better things and some fame within the hobby) so I was a little nervous about the effect of the migration to a new venue. I didn’t intend to do any shopping as such (and didn’t – two bags of bases from Warbases!) and thought I’d have plenty of time to browse round the games. It didn’t turn out that way because I seemed to spend all day talking to people I hadn’t seen for ages and those who I met again at the Bloggers’ Meet - up arranged by Pete Barfield (Panzer Kaput). To paraphrase Mr Baggins Snr, I didn’t speak to half of them half as well as I should’ve liked; and I give credit to more than half of them half as much as they deserve.


The games were generally excellent and the ‘best game’ winner was inspired (James Morris’ ‘Verdun’ game). My own favourite was the Humberside club’s 1666 naval action and I don’t particularly like tabletop naval games! That’s it from me on the show as there’ve been some good reviews and reports and, even better, some excellent photographs posted around the ‘net already.


O.K., time for a sudden exit and get the painting table fired up.
- May 29, 2016 9 comments:
Email ThisBlogThis!Share to TwitterShare to FacebookShare to Pinterest


Aside from domestic and building related things, I haven’t done much since the last post. Hands haven’t been behaving. So painting or anything more delicate than shifting stuff around and little patching jobs have had to be side lined. Still, onward and upward eh? Thought I’d better produce some actual evidence of the cause of my grumbling, so here’s a piccie of my right hand – being right handed, it seemed the obvious choice: 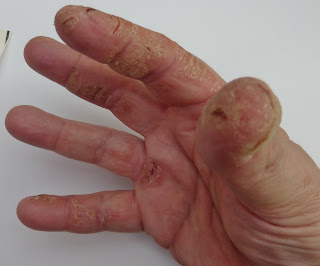 Sympathy cards and cash can be sent via HM the Queen.


Anyway, I have actually been able to pick off bits of painting in short, irregular bursts (no change there then) so I’ve added a few pictures of WIP stuff. No apparent sign of consistency of theme so, on that front, all things are quite normal. There are a couple of chips here and there, caused by gravity, which need touching up. The first is the Warlord Games Gustavus Adolfus figure (now demoted to an ECW Royalist cavalry field officer) waiting for his horse and some glue and the rest are from the Walsh WSS Irish (French) regiment; all Ebore figures: 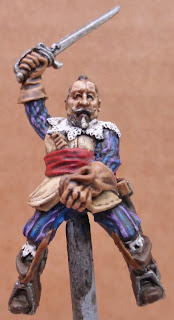 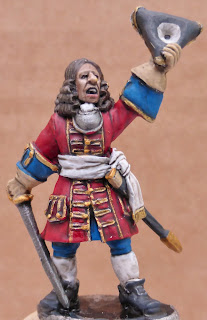 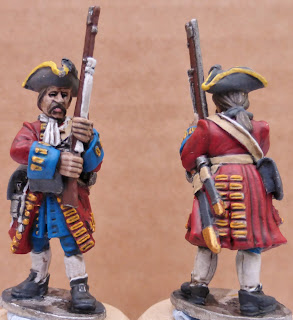 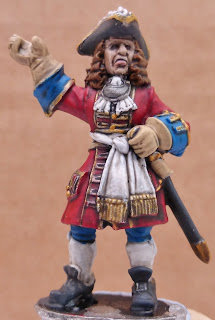 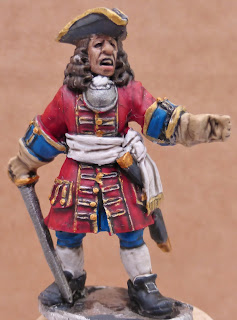 Going to Partizan this Sunday, if only to see Pete’s new banner for his VBCW game. I’m not sure it’s entirely his game, but he’s been fingered for it. Have a look too at the post below about the bloggers’ get together. Further news is that it’ll form up at the VBCW stand located at DG19 at 13:00, or when the big hand is at 12 and the little hand is at 1, if you’re from Norfolk. For those who are relying on satellite imagery, here’s a shot of the game banner, shamelessly nicked from Pete: 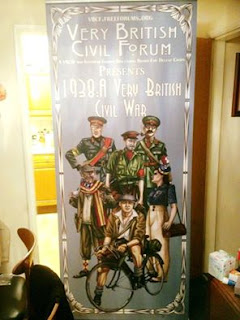 PanzerKaput's Painted Review: Blogger Meet Up North(ish) at Partizan: Calling all bloggers that go to or think about going to Partizan in Newark at the Newark Showground but have never really got around to it ...
- May 08, 2016 No comments:
Email ThisBlogThis!Share to TwitterShare to FacebookShare to Pinterest
Newer Posts Older Posts Home
Subscribe to: Posts (Atom)