So anyway, amid all the excitement in our 'ouse about young Henry, I've been knocking off the odd figure or two in the grand scheme to finish the 15mil Napoleonic element(s) of the lead mountain. That's the good news; the bad news is that I picked a handful of staff and field officers of various types which wasn't such a bright idea as I don't particularly like doing them. No reason why, but it's always been like that. Nevertheless I banged away a bit at a time and finished the first three last night. They're French (No? Really?), done in the usual Vallejo and whatever else I can get my hands on acrylics with a finishing coat of Revell matt varnish over some craft acrylic satin (or gloss – they look the same!). By the way, the acrylic varnishes from the various craft paint manufacturers is good stuff: non yellowing and tough (and cheap!). 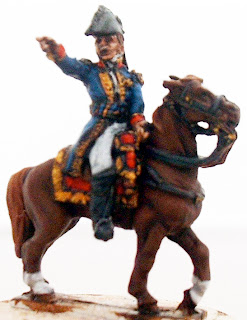 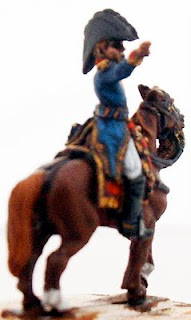 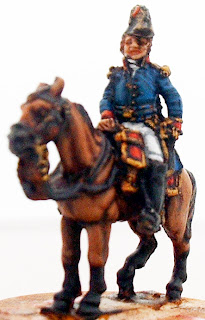 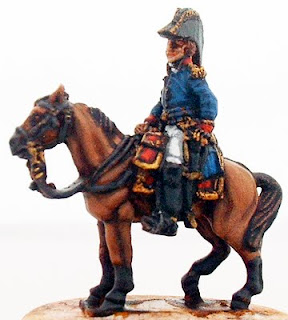 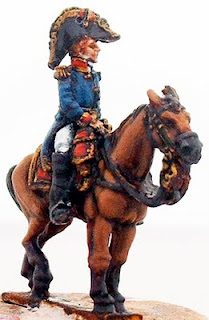 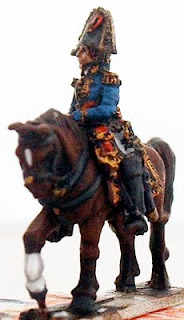 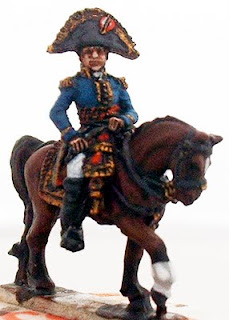 Now then, Points of interest (or maybe not):
That's about it really. The figures will probably hang around until I get around to doing some ADCs for them. Can't do with all these rules on how many figures to a general's base etc. If you want the odd staff officer there too, bung one on; they're your leads!
I'm probably going to get started on the rules in a few weeks – when the weather closes in for the autumn. They'll be a combination of Shako, Le Feu Sacre and Valmy to Waterloo with my own pet likes included. They're for my enjoyment, so I can do, more or less, as I like. I tend towards the playability side (lazy, see?), but with a hankering for simulation, so there has always been a sometimes odd marriage of styles over the years. Things 'out' include buckets full of dice, little bits of paper all over the table, huge roster sheets, ten page QRS's and stupid symbols trailing behind each unit. I go for simple (but scenic) casualty markers with a stiff on a base numbered on each face and the occasional coloured die. Keep it simple as possible.
Now then, lately I've become even less tolerant of mithering buggers who populate various wargaming sites and whinge when an order takes more than ten minutes to arrive or suddenly become experts in sculpting etc. So, I think it's about time little people like us promoted the good operators and the talented gamers/painters/sculptors etc. who aren't this week's fad, but who keep the hobby moving without the banner headlines on PMT. I'm not going to start an 'Oh you've got a beautiful website' thing because some of the best websites aren't all that good technically, so no ego trips there. Right, first off, three of blokes who've been very helpful and are easy to deal with:
Ian Marsh- Fighting 15's
Mike Oliver – Warmodelling UK
Bob Connor – The Wargames Command Post
They're the first three that spring to mind and they're really decent blokes. More importantly (or maybe typically), they have a good sense of humour and a handle on the real world. Fast delivery and excellent communication.
Now a nod to Paul Hicks, a sculptor who has just launched his own Mutton Chop range. You all probably know his stuff, but I thought I'd give him a mention too simply because he's such a decent chap.
Finally, because he can attract more bad press than Rupert Murdoch as he's a cantankerous old bugger much of the time, a bit of recognition to Frank Hammond. Frank who? Well he was the original owner of Mongrel Miniatures and he currently lords it over Minden Miniatures (see the column to the left of this. His current Seven Years' War line is very nice and very accurate, but hard to get hold of because it's not a commercial outfit as such. Frank sells to a small client group to fund the expansion of the range which was originally designed to be only for his own use. Despite rumours, he's a decent bloke and if you buy off him you'll be pleased to know he's paranoid about turnround times on orders! No, I don't buy off him, but I've known him for ages.
Right, that's it. I'm not turning this into a 'Meeples' thingy (remember when he used to call himself 'Earthquake?) and I don't want to put Mike Siggins out of business (who's also a nice bloke), so this is an infrequent exercise.
Anyway, got to go; got to put me washing out . . . .
;O)
- August 04, 2011 5 comments:
Email ThisBlogThis!Share to TwitterShare to FacebookShare to Pinterest
Labels: Napoleonics
Newer Posts Older Posts Home
Subscribe to: Posts (Atom)