Seems like I've been ever so busy these past few weeks, but without anything to show for it. Typically, I've also forgotten to do lots of stuff, but that's me.

Anyway, remember a wile ago I mentioned I planned to paint up the Earl of Derby's regiment of foot and that I'd completed the Marquess of Winchester's foot? Grand lads, but, just before Winchester's were to have their colours applied, Chris remembered an old catchphrase of my Uncle Arthur's about a statue of the “Earl of Derby, mounted”, loaded with appropriate innuendo. Now it happens that there are quite a few associations with the Stanley family in this neck of the woods and something mysterious about some connection with Salford Lads' Club (no, Morrissey never went near the place save to have his photo taken for that album cover!) so it seemed appropriate to switch the designation of Winchester's to Derby's, which I've done and that's saved a batch of figures for another unit.

I've knocked off Lord Rivers' regiment (previously Sir John Boys – same chap, but a bit of brown nosing apparently went a long way), which is a Cheshire regiment (and probably North Wales and Staffordshire too). See these: 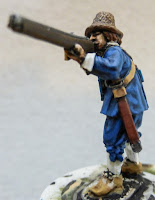 They're a bit too uniform and maybe overdressed, but they're a nice mix of Perry and TAG.

So that's it for a quick update. I'll probably hit the keyboard again in a couple of days or so, so standby . . . .