. . .. why the blogosphere is so full of ramblings, but there are some really talented writers out there who are generally ignored. That's a shame when the likes of Stephen Fry babble to insane levels to the rest of the twitterati and political blogs pump out their dull propaganda. I follow a few twitters and blogs and the blogs are far better - that's what they're supposed to be I suppose. However, they do soak up a lot of time which is why I try to restrict the number I read. Others I know don't and spend far more time than I do reading online and commenting with abandon.
These days I tend to stick to blogs with painted leads to view and not too much reading matter. That wasn't always the case and I used to spend hours catching up on the opinions of people I didn't know, never met and never hoped to. What's the point? It's not like  I was reading a Neil Gaiman book or catching up on events of a friend. So are these simply virtual diaries meant just to provide an outlet for our thoughts or creative juices without any thought of who, if anyone, might read them?
Missed Salute today. I didn't actually miss it as I never intended to go so missed might be too strong a word for it.  I didn't go to the Triples of to Vapnartak either. This was also intentional as I've grown tired of shows and can get what I need/want off the net. Nevertheless, I'll go to Partizan, but only to see people  I know. It's usually a day of short conversations and mickey taking interspersed with lead browsing and parting with money, often on impulse buys that will remain unpainted for possibly years or be eventually given away. I illustrate this point with thte photo below of Foundry Vikings donated by Frank when I was going through my Dark Age phase. IIRC he got them from a chap in America during his Dark Age phase. More impulse buys? Probably not - you don't impulse buy Foundry figures if you live in the States! 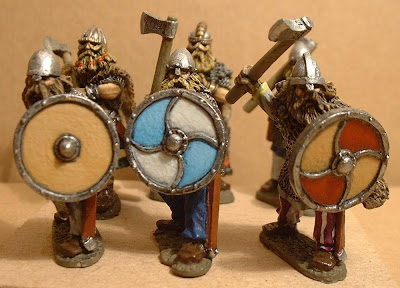 Not a very good start to my turned over leaf eh?
Anyway,  painting total so far for 2010? Bugger all! I'll have to lay off the drugs and booze and focus on the important things in life like leads and the sale of Cadbury to Kraft.
Okay, projects in hand for the present are still to plough on with the 28mil ACW and the AWI stuff, interspersed with 15mil Napoleonics, bits and bobs and maybe a resurrection of the 15mil WWII. The main problem is going to be where in the hell to store or even use the units. The ACW and AWI  stuff bring in about 1,600 figures if they go full term when I've got the options of 4'x4', 6'x4' or 8'x5' playing areas (if I can ever gt back in the garage!).
Anyway, some old piccies of ACW stuff to keep the pot boiling: 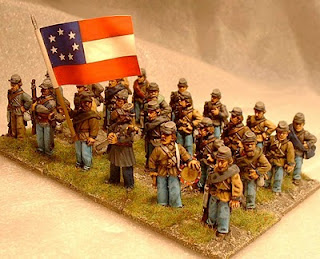 These began life as some Foundry figures Chin gave me, so I finished 'em off, added Redoubt command and they're now part of Gordon's Virginia brigade. 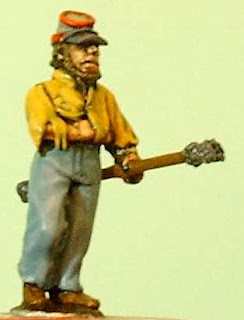 This chap began life as a Foundry Confederate prisoner figure, now a member of the Alagheny Artillery, with a head swap and bits. 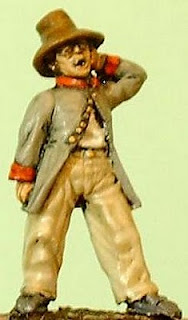 Another gunner from the same unit - just a straight paint job on a Foundry US artilleryman. 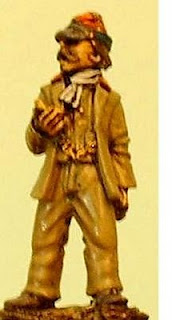 Battery Commander for the above. He started out as a free figure from on of the Partizan shows, but has had a head swap and bits removed. Not HIS bits - I need to make that clear . . . 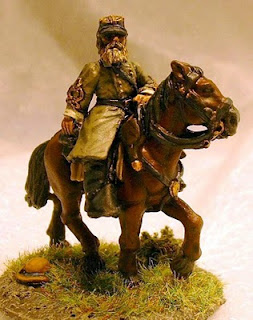 John Bell Hood
Started off well, but became obsessed with staving off the inevitable in the later campaigns.
Foundry Longstreet figure with a head swap.
Shame about the clarity of the piccies, but my photographic skills are absolute crap. Can't do lighting, can't do posing and my eye for a picture is absolute shite.
- April 13, 2010 2 comments:
Email ThisBlogThis!Share to TwitterShare to FacebookShare to Pinterest
Labels: American Civil War
Newer Posts Older Posts Home
Subscribe to: Posts (Atom)