Fulfil my dreams of avarice!

Exiles' blog is running a free give away competition on his blog: http://exilespainting.blogspot.co.uk/2013/05/blog-3rd-anniversary-prize-draw-12th.html

Mentioning it here helps me to qualify so don't enter or you'll lengthen my odds!

Something of a record

Back again: three times in 24 hours! 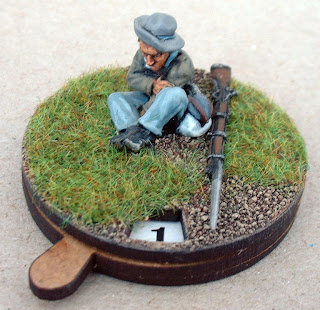 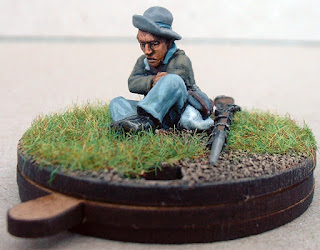 There now follow some shots of the other stuff I've been basing. They're all ACW Confederates (no an obsession) and again, nothing too exciting. I'm afraid I just do anonymous units, so there's nothing here for the purist, but I've got a couple of Perry zouave units on the blocks and you can't fudge those.


First off is a unit of 28mm Foundry figures with the odd Redoubt figure thrown in. Too many photos really, but this is my favourite ACW pack from Foundry (along with the set in hats) so that's justification enough for me. The figures were actually painted last year sometime, but, with my usual enthusiasm for basing, they only got finished recently . . . . 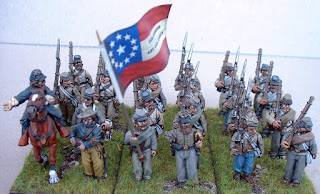 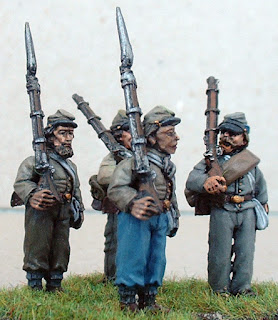 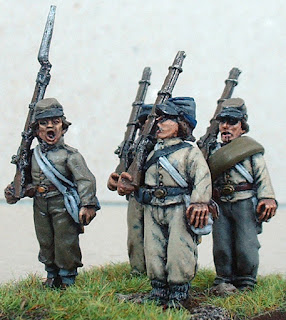 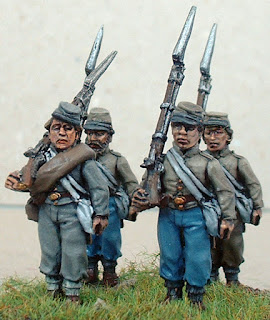 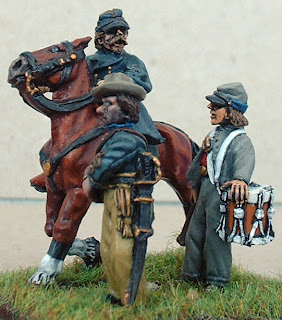 Finally, a batch of Peter Pig 15mm Confederates in the usual 'splash it on and stain it' finish. Lovely little figures – nuff said.

That's it then. Off to do more mischief with a paint brush and continue messing around with rule sets until I achieve the impossible dream of a set of Napoleonic rules (and maybe some ECW!) that I'm happy with and fits my (probably) distorted view of the warfare of the period.
- May 25, 2013 4 comments:
Email ThisBlogThis!Share to TwitterShare to FacebookShare to Pinterest
Labels: American Civil War, Wargame

Go to the link on the right and do something good for somebody!
- May 25, 2013 2 comments:
Email ThisBlogThis!Share to TwitterShare to FacebookShare to Pinterest

Just when you thought it was safe to go back into the water . . . .


To months or more seem to have slipped past without so much as a by your leave and I've little worthwhile to show for it. That's not strictly true as I've bashed out some more AWI battalions and based like there's no tomorrow. The real world has impeded my progress now and again, but I've managed to keep something or other going just for the sake of it.

The more observant of you will have noticed by now that I've had a fiddle with the design of the blog. The other one was beginning to get on my nerves so something had to give. This new look seems brighter, but not as tiring on the eyes and I asked the oracle and was advised it's still fine for anyone with sight difficulties, so I'm still a really nice bloke.

O.K., big events: er . . . only one I suppose which was the acquisition of a replacement wargames board. I think I mentioned that my old friend of many years' service has just about had it and won't stand any major usage. I was casting around for inspiration for a replacement and hit upon the idea of a table tennis table: 9'x5' of gaming bliss, easily handled by one person and a stowable dream. However, it's restrictive in size and can only be accommodated in the garage – not good for smaller games or games during winter, which is about nine months of the year round here – summer's when it's warmer, but it rains more. Thankfully Costco came to the rescue by kindly stocking some (very) heavy duty plastic collapsible tables with metal legs and frames and countersunk handles and they had them on offer! Quick dash to said emporium for four of the blighters and I now have the option of tables in the following sizes: 6'x2'6” (1 table), 6'x5', 10'x6' or 12'x5', all covered by a green felt cloth. Next stop some hills and the like and get my buildings finished and based.


Another big event for me was a visit to the Sheffield Triples last Saturday; first time in a few years. I'd originally got so fed up with the lack of proper (any?) disabled access at the Octagon Centre that I decided to boycott the event. I'm not disabled, but I got annoyed at seeing those who were (and there are some disabled wargamers) struggle with lifts and split level floors. Skip the next bit and on to the new venue, lunar atmosphere and all.


There have been several 'reports' on the show so all I'll say is that I enjoyed it because it was the first show I'd managed to get to for a couple of years, but, overall, I've been to better. It's certainly faded from its former glory. However, I did make a couple of modest acquisitions: two scoop purchases books from Paul Meekin Books (keep an eye on this bloke as he has some good bargains and hard to find stuff) and the Cromwell and Prince Rupert figures from Empress Miniatures. These are nice figures, but at four pounds each, not the cheapest around. However a pound from each figures goes to the Naseby Battlefield Trust, presumably towards the construction of a Little Chef on the road the Highways Agency plan to run through it.


Now then, best of all, I spotted the new casualty markers from Warbases. Have a look at : http://war-bases.co.uk/ACCESSORIES/GAMING-AIDS?product_id=159 Just about to photograph one I've completed, so watch this space.


That's more or less it for the show except to say that the clincher for me to schlepp over to Sheffield was the chance to see James Roach's 'Battle of Cerignola' demo game. I've been drooling over the figures on his blog for ages (http://olicanalad.blogspot.co.uk/) so the opportunity to see them at first hand was worth the trip. He's a nice chap and a great painter. Had a chat and an oggle and went away contented.


I mentioned I've been doing a fair bit of basing lately (ugh!), so I've included below a few shots of some of the units I've completed. They're all AWI Continental troops and nothing too exciting, but it serves as evidence that I've not been wholly idle. I ought to do a little introduction on each one, but they're pretty popular units and I doubt they're unknown to anyone. The flags are conjectural and from either GMB or Flags of War with the Warner's flag from Bodie's Banners - this is the only accurate one represented. All the units are 24 figures strong, but some pictures only include the figures I could get into the shot! 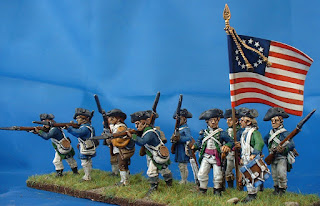 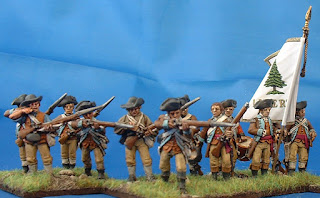 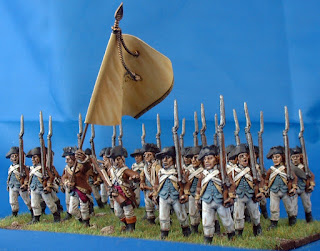 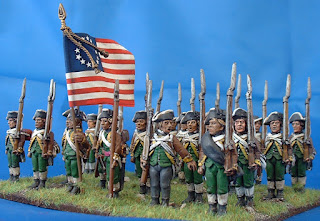 More pictures in a day or so and also the shot of the casualty marker (he says optimistically . . .).
- May 25, 2013 4 comments:
Email ThisBlogThis!Share to TwitterShare to FacebookShare to Pinterest
Labels: American War of Independence, Shows
Newer Posts Older Posts Home
Subscribe to: Posts (Atom)