Only a couple of months since my last blog entry, so quite regular really. Although nothing has happened on the wargaming front since my last raid, it doesn’t mean it hasn’t been on my mind. To be honest, between hospitals and house stuff, it’s about the only thing that’s kept me relatively sane.

Did I say I’d acquired a copy of the new(ish) ‘Baroque’ rules from Dadi & Piombo? 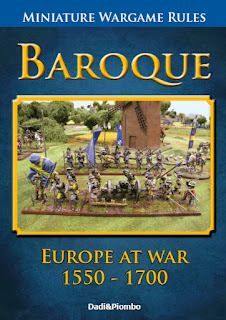 They’re a nice set of rules and have easy mechanics and I think they’ll give a pretty good game, but, as they cover a one hundred and fifty year time span, they’re not that strong on giving the ‘period flavour’ of specific conflicts, or at least the features of a particular conflict that make a wargamer prefer, say the Thirty Years’ War to the English Civil War., but that’s not their aim. If you want to go the whole hog, it’s possible to base everything on 6cm square bases (three per unit for foot, dragoons and horse and one for guns) which makes basing simple. They do have specific army lists (ugh!) which go a fair way to reproducing various armies, but if you’re looking for something to reproduce your particular take on the Nine Years’ War or the atmosphere of The Last Valley, then you need to get something more specific. That’s not to say you can’t make a reasonable go of reproducing a particular conflict and there’s no such thing as a set of rules you can’t tweak, but it all depends on how much effort you want to put in and how historically accurate your interpretation of that period actually is compared with what D&P have produced. Back to my thoughts on the accuracy or otherwise of a wargamer’s view of an historical period is. We also have a nasty habit of strict ‘periodisation’ so history is often thought of as being made up of distinct chunks of time without any consideration given to the process of military and/or technological evolution (cue debate about mid to late nineteenth century warfare in Europe and America). 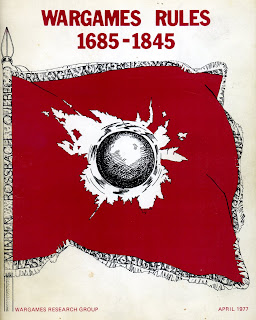 They were a bit of a game changer in their day, but gave the gamer the facility to build up characteristics of units which gave a reasonable reproduction of the real thing. They did cause a few headaches with their mechanics at first and their terminology was a bit idiosyncratic (‘Irregular soldier skirmishing infantry with jezzail’ and such), but they did give a good game – and still do for some gamers. By the way there are some derivatives, ‘Elan’ for Napoleonics and ‘Pro Gloria’ for the Seven Years’ War, for example – other rule sets are available . . . .

Despite my oath not to buy more lead until the current ballast is painted and based or has found its way to other venues, I succumbed to a few boxes of the new Perry ACW releases. The temptation just got too much for me, but regrets have I none. They’re much better cast than has become the norm of late and they contain some nice characters. Although I got a mixed bunch, they are all destined for the Confederacy with on ly a few exceptions. The object of the exercise is to produce some ‘firing line’ regiments composed of a mix of Perry, Foundry and maybe Redoubt figures with some adapted Empress Miniatures’ Maori War castings thrown in for good measure. Only a few mind as they’re eye wateringly expensive – seven quid plus postage for four figures! I’m no skinflint, but I’m unenthusiastic about trying single handedly to improve their liquidity ratio.  However a few of my favourites swiped from the Perry site: