Tried to get a last one in before 2017 ended and the world went to pot again, but I've managed to keep up my batting average and missed it completely. Nothing that exciting to report, but I have been quietly plodding along, knocking out old stuff that should've been finished (or started) long ago. Still, the real world things that kept me diverted last year (and before, if I'm honest) have now subsided, but the leprosy returned during the late summer/autumn (back on the tablets now, thank God) and that didn't do much for hobby effort or morale. 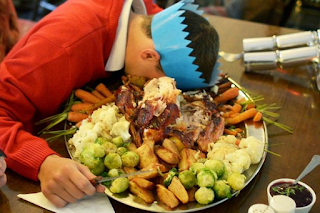 Back on track now though and, as Christmas and New Year are out of the way, it ought to be a Montgomery style advance, but on a broad front with lots of distractions.

Since the previous post, my butterfly approach has served to divert my attention in all sorts of ways. As a sort of side order while I was painting other stuff, I decided to start experimenting with colours and techniques for the landsknechts I've accumulated. I'd like to have said collected or maybe gathered as part of a project, but accumulated seems to be nearer the mark. I decided to pick a few metal ones at random and try colour combinations for the hell of it. I didn't want to paint up a batch of peacocks and aimed to rein in the impulse to include every colour I could lay my hands on by sticking as closely as possible to the colour scheme of the other figures I was painting at the time, but, as you can see below, I failed. The three figures are all Foundry and they paint up well enough, (though I'm not over the moon with them and Young Henry immediately spotted the one with the squint!) but I think the new plastic Warlord figures will turn out better. Come to think of it, many of the other Foundry figures will be easier to paint and look better. It was just pot luck with the three I grabbed from the pile. 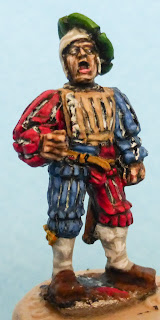 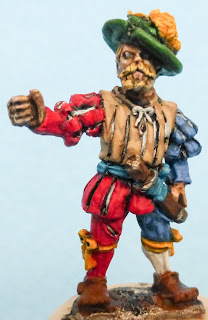 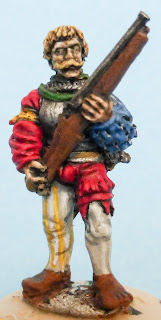 Regarding the Warlord range, I'm not sure how far they intend to take it. Since they acquired the plastic landsknechts the availability of 'Italian Wars friendly' figures has increased and there isn't anything like the shortage of suitable castings, generally easily mixed between ranges. All to the good.

This brings me to my Secret Santa gift from the mystery wargamer south of Watford. He/she very generously gave me some packs of the warlord metal landsknechts: various personality figures and officers and a lovely little light gun. I've gleefully nicked the photos below from the Warlord site and, to be honest, I can't see this lot hanging around too long before they fall victim to the paint brush. So, whoever my Secret Santa was, thank you very much. 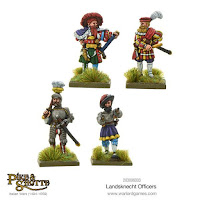 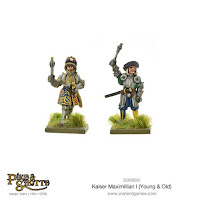 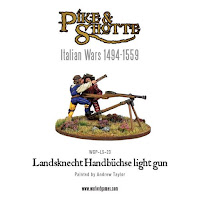 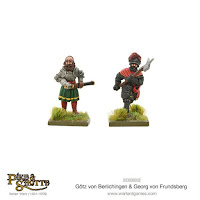 Continuing the twin themes of gifts and acquisitions, I managed to cop for a decent haul of books this Christmas (and my birthday was in November, so some of those titles are included here), but I'm obviously only going to mention the military ones. I'm not going to do a review of each title because that would take pages of opinionated twaddle and I haven't read them all yet anyway. 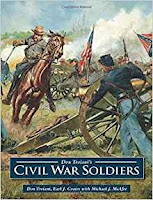 Nevertheless, 'A Rumour of War' is certainly one of the best autobiographies I've read and will stand a lot more than one read. 'The Noise of Battle' is undoubtedly heavy going because it's packed with detail and gives much to think about, but it is, I think, essential reading not just for anyone interested in the final North West European campaigns, but for anyone interested in Second World War land campaigns in general. 'Lutzen and Bautzen' are my favourite battles from the latter end of the Napoleonoic Wars and this book is good, despite Nafzeiger's dull style. It's got the expected army lists and decent movement records, but it's a pretty cold fish. Forty years ago I'd have killed for it; now I'd probably just give someone a fat lip. Finally, Don Troiani - what more need I say?

The painting (and basing) table has seen some success with two projects making some headway. I'm now in the position of being able to hang up my 2” brush and get back to tiny tin men and the like. First off was the completion of the bases for three ECW Royalist foot regiments: 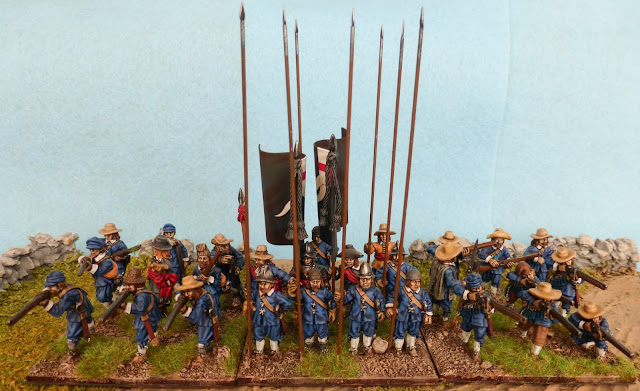 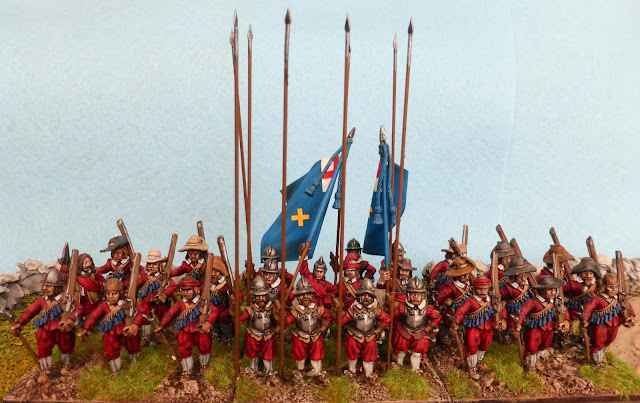 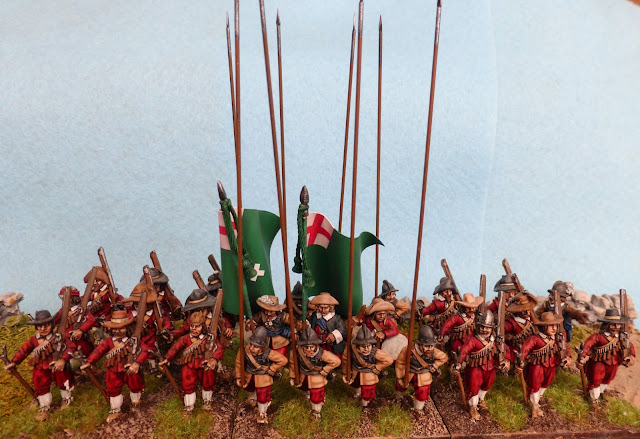 Just Lamplugh's to finish off and then onto the rest of the horse and the artillery. Not a big job really, but I'm also grinding out the Arnhem Paras and Germans which I'm on a promise of a set of games. They shouldn't take too long either because they're Peter pig and pretty easy to paint and the German armour (4xStugIIIG's and 4xPzkpfwIVH's) is already mostly done (and has been for a long time). The paras I've recently finished as a trial run have turned out quite well and the tanks look OK for wargames (just the crews to paint and a bit of touching up, but  I seem to have lost my knack of applying decals) so it's off with the rest of the set up and on with the games. Still not entirely sure which rules to use. The Battlegroup set are very good, but the old, slimmed down Firefly rules are decent enough too. As the original intention was to use the Firefly set with multiple figure bases and there's a temptation to actually get some 20mm stuff for the Battlegroup rules, I might do what I usually do and duplicate things (aaaaarrrrgggghhhh!). Anyway a poor photos of the 15mm stuff, equally badly painted: 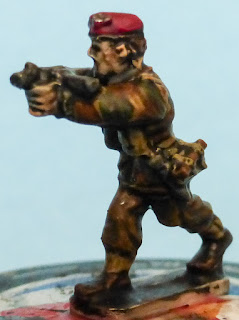 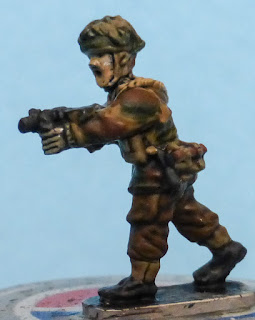 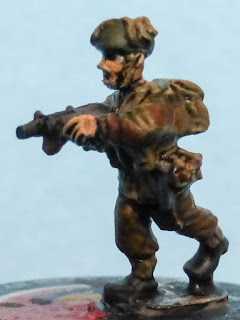 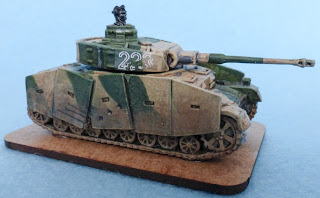 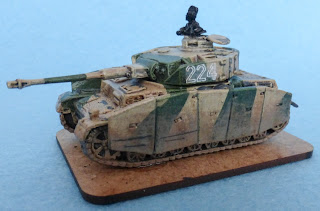 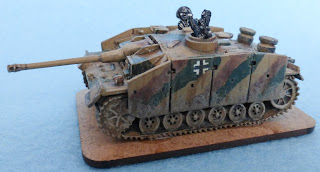 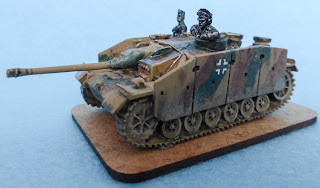 And that's about it for an update to begin 2018. I'll try to make more of an effort for the coming year, but don't expect podcasts and the like. There're a few things happening this year which will take up time and will probably be more interesting/demanding than wargaming.