Painting the Clouds with Sunshine


Writing this exactly a week before Christmas at the time of year you realise the Christmas card list has been subject to the attentions of the Grim Reaper. To quote Flight Officer David Campbell in ‘The Longest Day’, “I don’t mind being one of the few; trouble is, we keep getting fewer”.

There’s an element of entertainment too, like seeing who hasn’t sent you a card by a particular cut-off date and then sending them a card on the last possible posting date before Christmas, when they have no possibility of send you one in return. If they had actually intended to send you a card, but got delayed or distracted (it happens), you have the satisfaction of imagining their guilt and if they hadn’t intended to send you one, then you have the moral (or game) advantage for the coming year while you decide on the tactics for Christmas 2017. Of course, that could be another reason why my list gets smaller each year . . .

However, enough of this and on with quick summary of what I’m working on at the moment. I’ve included below a few photos of some of the command figures which will make up The Marquis of Winchester’s Foot: 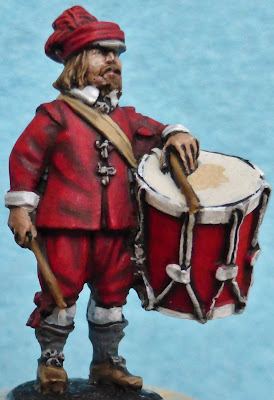 They’re all Perry with a few Foundry mixed in and were originally intended for The King’s Lifeguard of Foot but for two reasons: everybody’s got that regiment and Charles was a thoroughgoing dunce. However, I’m a fan of red coats, so I sought out another regiment that would fit the bill. I already have plans for a couple of such regiments, but, as the pike figures are particularly well equipped, I thought this unit ought to represent one formed by someone with access to his own source of arms or wealthy enough to buy in sufficient arms and armour from the Continent. A certain John Paulet, 5th Marquess of Winchester fitted the bill nicely, being a particularly wealthy Royalist supporter who recruited his own foot and horse regiments for the King.

Both units were quite modest, the Horse numbering around fifty troopers and the Foot only mustering around two hundred (but when has that ever bothered a wargamer?). However, the really attractive thing for me is the beautiful irony that neither regiment ever served in the field, both being engaged in the three sieges of Basing House, Winchester’s home. Basing House was a thorn in the side of the parliamentary armies as it commanded the main road from the West Country to London and, to make matters worse, had a reputation as a refuge for Royalists and Catholics. So, quite a famous unit with a famous patron and, to add to its prestige, Basing House was finally stormed in October 1643 by troops under Cromwell himself.

The Civil Wars often receive a sidelong glance from gamers and seem to have earned the reputation of being quite tame. It’s probably a good place here to mention that the storm and razing of Basing House involved a significant number of deaths among the defenders. Although atrocities against civilians during the Civil Wars weren’t common, aside from the attentions of passing armies, (Ireland was, I think, a different issue) and generally discouraged by both sides (if you ignore Bolton and a few other places and the King's 'Irish' troops might argue differently), the explanation may be the presence of a number of Catholic priests among the defenders. Interestingly, it later came as quite a shock to potential victims that Fairfax’s New Model Army was well disciplined and not given to the behaviour of other armies during the Wars.

Not satisified with ploughing through one regiment, I thought I might as well knock off two at once as they were stored in the same box and I could simply promote another of my ‘red’ regiments. So, the second lot I’m working on is Sir Thomas Tyldesley’s Foot which was raised in Lancashire (Hurrah!) and featured in some of the more famous actions of the Civil War. Oddly enough, one of these was the Storming of Bolton and subsequent massacre, so maybe I have a natural inclination for that sort of thing. However, unlike me, Tyldesley was extremely wealthy and raised regiments of horse, foot and dragoons for the King and began his service at Edgehill, which earned him his knighthood.

Unlike Winchester’s regiment(s), this unit actually took the field and fought at quite a few engagements, including 1st Newbury, Nantwich and Marston Moor. Some command figures: 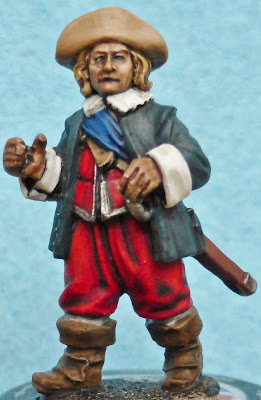 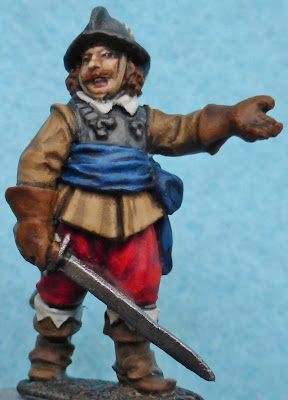 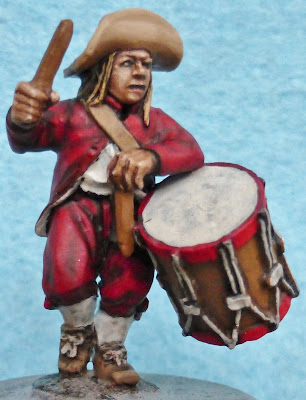 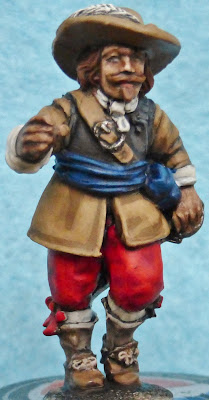