Each week there’s challenging post on the Polemarch blog, which I try not to miss, but frequently do. It’s usually an evolving topic, though not always, but it is an addictive read. I want to continue my thoughts on a  recent post, but with a slightly different slant. I’ve used my comment on Polemarch as framework.

The recent rumblings about the Triples, both pro and con, have shown how the same event can be the subject of widely divergent views. In some cases, it’s a bit of a challenge to imagine that all the correspondents are wargamers because their views have been so different. I’ve touched on this before; that there are several flavours of wargamer and there’s maybe no such thing as vanilla.

I was going to start with "As we grow up", but that seems an odd thing to say when discussing wargamers, so I'll try it another way. When we first start playing with the toy soldiers we're gifted by indulgent parents or relatives, we always have 'Goodies' and 'Baddies' and certain figures take on personalities which we inflict upon them. Later on, if we become infected with the wargaming bug, we begin a transformation influenced by many things from interest in history to the influence of our peer group of wargamers and start to develop our own wargames personality. Now, as we're human beings, the end product is as varied as in all walks of life and as complex. The gamers among us set off in pursuit of the killer army, the historians chase the impossible dream of the perfect simulation, with all varieties of wargamer in between. The wargamer's development is further influenced by all sorts of drivers such as aesthetics, competitiveness, personal recognition and the like. If there is an end product (because many wargamers never cease to evolve), it's got to be unique because there are always strong influences from outside the hobby - even complete freedom from these is still an influence.

So, we’ve got our wargame being, replete with his/her preferences, likes, dislikes, prejudices, aspirations During our wargaming lifespan we adapt the mores of our approach to the hobby, with some gamers becoming able to switch between two or even three wargame ‘personalities’ depending upon choice or circumstance. It's not unusual for wargamers to be avid skirmish gamers while, at the same time, being devoted to map based gaming. In fact, it’s common to see gamers drop from map based campaign games to tactical level games with figures to fight out engagements on the table – it’s long been a wargaming tradition. However, even though we coalesce into groups/tribes, our separate customs include variations which are more finely tuned to personal taste. This can manifest itself in such things as house rules, just as English has regional dialects. Psychologically, we're much more agile than we are in the real world and we can be comfortably schizophrenic (or maybe it's just me). I’ve periodically gamed with a chap I've known for about fifty years. When he moves a unit of cuirassiers into the attack, he's simply moving a chess piece, although he can appreciate the aesthetic aspect presented by the figures and the board etc. When I do likewise, my cuirassiers take on a far more exciting character with waving swords, cheers and thundering hooves. We're using the same rules on the same board and the same sorts of figures, but I find my 'dialect' far more comfortable than I do his.

The Russians are coming!

Well, so to speak. I’ve been sorting out the lead pile and I think I ought to give the Russians a bit of a start as they’ve been hanging around for a while and the Austrians are mind numbingly boring to paint. That led to a problem I’ve been trying to avoid for a while, which is the headgear of the grenadier regiments around 1805/07.

I specifically needed clarification for the shakos of the fusilier battalions of Russian grenadier regiments - did they have the busch or a pompom? The picture began to clear when I read "Uniforms of the Russian Army during the Napoleonic war Vol. 8 - The Grenadiers”  by Aleksandr Vasilevich Viskovatov and Mark Conrad (Trans). I have the cheaper Kindle version, but the issue of the pompoms does get a mention and I thought I was on the way, although slightly less than over confident about it.

I’d put a note on the “Napoleonic Units and their Uniforms” Facebook group, but noting much happened in the way of responses until I got a reply from none other than Alexander Mikaberidze, author of a number of books on the Russian Army and its campaigns during the Napoleonic Wars. Speaking Russian, he had a marginal advantage over me (!) and posted two illustrations from Sergei Popov’s book on Russian uniforms (nope, can’t find it over here either) so, if anyone’s in the same boat, I’ve included them below: 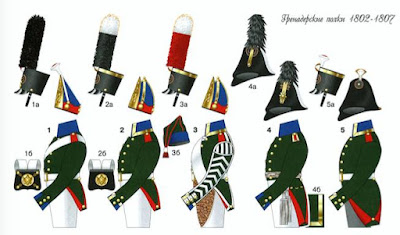 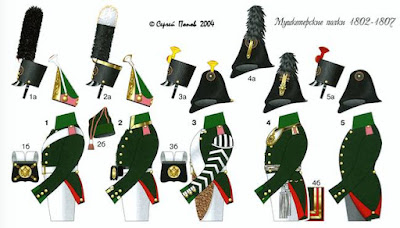 
While I was avoiding getting on with some WSS French, I decided to try an experiment with the new Boki Russian generals, which I did, However, the green is far too bright and should be very dark, almost black. Nevertheless, I’ve posted a couple of photos of the trials below, if only to show the Boki riders on two AB Shetland ponies: 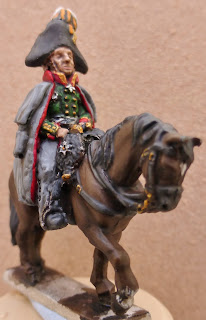 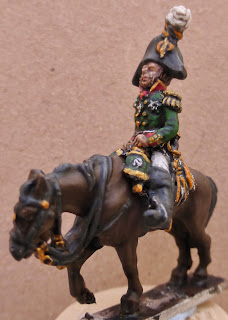 The Boki figures probably won’t present much of a threat to AB, but the character and animation is, I think, better. The faces have expressions and the posture of the riders is more appealing to me. I have a couple of others underway with a ‘corrected’ green Which I’ll put up next time (slowed at the moment by hands and work on the house etc.)