That’s it then, Christmas over and New Year’s no longer a mystery: it’s going to be like last year, but with an extra day. This is a sort of interruption to ‘normal service’ and also another stop gap post which allows me both the keep the pot boiling and to revel in smugness. I’m not even going to bore you with the presents I got for Chrimbo, except to say that they were rather good, but I will say something about my incoming Secret Santas, both of which are more than a little useful. I’m calling them both Secret Santas because I can’t quite remember the actual titles for the two schemes and I got them mixed up anyway – ask Chris Stoesen . . . .

Right, the painted Secret Santa (run by Cath and Ian Willey) was a set of AB French Napoleonic ADC’s which are very useful given my eventually final decision of the command and control element of the Napoleonic rules I’m plagiarising – you’ve got to be honest. I’m going to need plenty of ADC’s and, as sorting out these figures has been known to produce an uncomfortable feeling in the scrotum, I’m well pleased. I know who the culprit is and many of you will too as he’s blown his own cover on several groups and his own blog and he sent me an email to let me know the figures were on their way! I understand MI6 has asked him not to bother applying for any vacancies.

You can see all the figures here, but I’ve nicked one of the photos without bothering to ask Ian for permission cos they’re MY leads anyway! 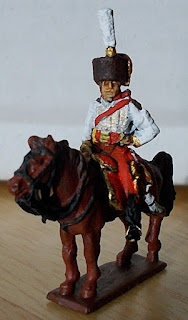 My other Secret Santa (the unpainted one run by Chris Stoesen) is from the other chap who reads this blog and is a set of Ebor French WSS figures. Again, I’m just a bit happy as I like the range and they’re lovely figures anyway. I’ve ‘saved’ a photo from the Ebor site as a labour saving device.

This is a really excellent range of figures, sculpted in the main by Paul Hicks, which are not only easy to paint, but also reflect the feel of the period as best as I can imagine it.

There is a down side to this gift though because it almost landed me in trouble. I was talking about these two Christmas presents with a cousin and said I planned to paint up the Ebor figures as a battalion of the Rooth regiment; some of the famous ‘Wiild Geese’. Now, this cousin isn’t a military expert, but she’s quite well informed, particularly on family history. Unfortunately, my family and Chris’ too includes various characters who sport the surnames O’Brien, Brighty, Dillon, Murphy and Riley. I bet you can see what’s coming.

“Why don’t you paint them as Dillon?” (That’d be the regiment, not the rabbit, and her mother’s maiden name.) Great! The fact that the cut of the uniform most closely resembles the Rooth unit and none of the others doth butter no parsnips, so I’ve lied like a hairy egg and promised to add a Dillon battalion to the list. If you see my cousin, don’t say a word.
- January 13, 2016
Email ThisBlogThis!Share to TwitterShare to FacebookShare to Pinterest
Labels: AB Figures, Ebor Miniatures, Napoleonics, Secret Santa, War of the Spanish Succession