Been a very mixed November so far (and there isn’t much further to go). Other than to say that it’s a lovely city, I’m not going to mention Paris or the other, bigger atrocities in the Middle East and stick mostly to our little fantasy world of wargaming. Fair to say though, I’ve just been going through the motions lately.

Early in the month, Young Henry had a burn about knights, so one quite nice Sunday we set off with the intention of visiting the Royal Armouries in Leeds and young feller-me-lad here (that’s me) would nip into the Fiasco show for a quick shufty. My daughter has been steeped in wargaming and its associated nasty habits all her life, so she had her own plan to cover this.

Got to say that l although the visit to the Armouries was very good as usual and Henry was captivated, the Fiasco visit was just that – a fiasco. Although it was held in the same complex as the Armouries, I hadn’t spotted anything about the show on the way in and, when the time came to get to the show, I couldn’t find any signage at all. Now, to be fair, it was about an hour and a half before close of play, but there didn’t appear to have been any signage. I finally found the show by asking two obvious punters (you know what to look for!) who said they’d had the same problem. So far not good.

I simply walked into the show without paying – couldn’t see anyone to approach and nobody stopped me because nobody was there. Inside it was pretty demoralising. I’m not sure how many visitors there were, but, at a rough guess, I’d say they were outnumbered by the traders by about five or six to one. I rarely single anyone out for special attention because it’s pot luck where and when I wash up, but I must say that, although I didn’t announce my presence with a boson’s call, I was studiously ignored at the Warlord Games stand and so, as I couldn’t find what I wanted because the figure packs seemed to have been slung on the displays in any old fashion, I walked – out of the show as it happens.

Now, it takes a whole lot less effort and energy to whinge about a show than it does to stage one, but this was a bit of a killer. The place may have been heaving with people earlier on, but, judging by the long faces around, I doubt it. If Henry had been a bit older and I’d intended to use the show as an introduction to the hobby, I’d have been more than a little peeved. Still, I did buy three pots of paint. Think I’ll stick to Vapnartak and Partizan and maybe the St Helens show.

Now, following a prompt from Guy Bowers, I bought a copy of his ‘Black Ops’ rules. I’m not a big fan of ultra modern games, mainly because I’m of a sensitive nature and prefer something which I haven’t just seen live on BBC News 24. As I said to Fran recently, I prefer games where I can pretend there isn’t any collateral damage with consequent little lead widows and orphans. (Sissy!) There’re a couple of good reviews of the rules knocking about already, so we’ll skip that, but my intention is to push them back fifty years or so and adapt them for Vietnam. This isn’t going to be a major exercise by any means and should provide some interesting, small scale games. First looks indicate that it shouldn’t be difficult at all to expand the games up to platoon size actions and maybe even larger, although that’s where other rules step in.

For me, the best part of November so far has been a marked improvement in the state of my pandies, which means I’m back wielding a paint brush, although it’s mostly been the 2” variety of late. Yes, we’ve finally made a start on the changes we’ve wanted to make to the house for a while now. Nothing dramatic, but it means a complete redecoration with bits of fitting and plastering in case I get bored. On the plus side of things, I’ll get my own wargaming space at the end of it all (in about a year, I think!), but it’s a slow job for one reason or another. A major factor in slowing things up is the need to move things around from one room to another to free up space to do the work. It’s a bit like one of those frames you had as a child that contained little tiles which you had to move round in sequence to make a picture or a pattern or words/numbers; a sort of two dimensional Rubik’s Cube. Part of this involves moving stuff into and out of the loft, which is a sort of black hole (it features in the new Star Wars film) and there have been occasional mishaps – mostly to things belonging to me.

So, remember the Regiment de Maine from almost exactly two years ago? The overall project had to go on hold for various reasons, but the two battalions rested in stately majesty on a shelf in the loft waiting for the resurrection of the WSS project. Well, they rested in stately majesty until some oaf (O.K., it was me) accidentally repositioned them onto the bedroom floor via the aluminium loft ladder (seemed like every rung). Gravity is certainly a constant round here. I was only mildly apoplectic as the damage didn’t reach the terminal stage for the unit. A couple of figures broken beyond repair, lots of things bent, plenty of paint chipped off, a dismounted colonel and no flags. Not too bad really, I suppose. Took about a week to do the repairs and rebasing and here they are before I put them away PROPERLY: 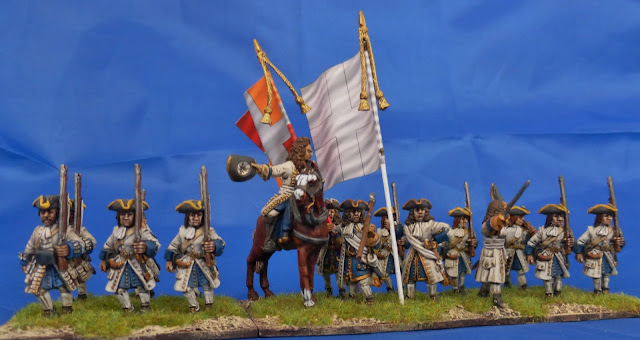 
A while ago, on Tony Howard’s blog, I described a friend (subsequently christened Jason Bourne - but don't tell him!) who would have been a boon to Shackleton or MI5 and then there’s Bill who, at 64 (ish), is still heavily involved in cave and mountain rescue and, last year, went up Everest (though he couldn’t afford to go right to the summit). So I thought I’d mention Joan. She’s a little older than me and she spent much of her working life in the theatre (the bits other than acting – I dunno), during which time she went out with Ian McShane and Robert Lindsay and has friends with accommodation in various desirable little places etc., etc. She’s actually a former colleague of my wife’s and I used to think she was a bit of a name dropper until a few years ago when I learnt to be less doubtful. About seven years ago, during particularly bad weather, she has hit by a bus as only Joan can be and suffered a variety of injuries, some quite serious. She is now disabled, but refuses to roll over even though she’s been forced to give up work. O.K., that’s really just setting the scene for what I think is remarkable.

Given her arty and theatrical background, she used to go to the Edinburgh Festival when she could and this year she had the burn to go again. She was sorted with accommodation through friends, but travel was likely to be a problem. Although quite comfortably off, thank you, she’s never been one to waste money and as far as Joan’s concerned, train fares are a rip off, so what to do? Just to complicate things, she’s permanently on crutches (refuses to use a wheelchair as they’re for old people and the disabled, for God’s sake!) and, in any case, the alternatives were accompanied by varying levels of discomfort. So, to cut it short, she made the Manchester to Edinburgh run, and return, on the back of a friend’s motorbike with another friend and her crutches in the sidecar and ‘did’ the festival!

My immediate reaction when I was told this was that she’s barmy, but, on reflection, I think she’s a trooper. I hope there’s an inexhaustible supply of people like her because we need’em. Over the years she’s become a good friend and I think I’m all the richer for it.
- November 23, 2015
Email ThisBlogThis!Share to TwitterShare to FacebookShare to Pinterest
Labels: Curcumlocution, Ebor Miniatures, War of the Spanish Succession