And so it came to pass that, as the man sat there scratching his bum wondering where time had gone (the tide hadn’t waited around either, pausing only to leave a clean mark on his neck), he received a visitation from a friend, not from Galilee or anywhere exotic, but from a place just north east of Stockport. He looked upon him and spake thus:  “Blimey, you’ve been quiet. What’s up?” The friend was not an Angel of the Lord; in fact he was very far removed from that role and certainly wouldn’t make it to a short list if such a post was available. The man sighed and showed his friend his scarred and bleeding hands. “It’s some sort of skin thing. They say it’s caused by some chemical contact or other, but they haven’t really got a clue. There’s no sense of touch and so I’m constantly dropping things and can’t pick up anything smaller than, say a cup or a book. It’s a bugger.”
The friend winced. “Eh, that looks bad. It isn’t catching is it?” The man smirked and said “No, it’s just my own little, painful thing. Sort of stigmata for people who don’t really know what stigmata are. It’s a kind of dry skin thing, but they have no idea what. I’m off to the Ossie eventually. In the meantime, I have a selection of creams and balms which are all useless save for one I’m thinking of keeping to grease wheel nuts and the like.”
The man and his friend had a consolatory glass of rum and considered the problem.
“Can you still paint your soldiers?” asked the friend. “I bet they’re a bit of a fiddle to get a grip of.”
“Well, sort of,” said the man “It takes an age though and controlling the brush is a pig of a job. Still, I’ve managed to knock out a few bits, mainly just to prove I still can.” And he showed him these: 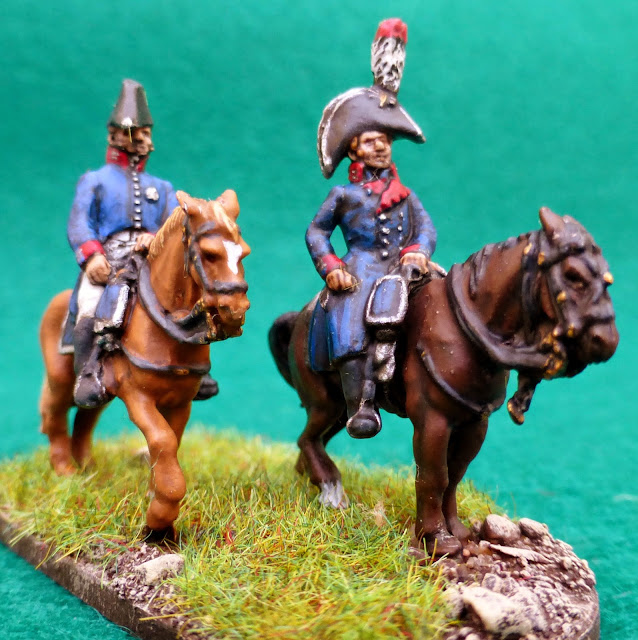 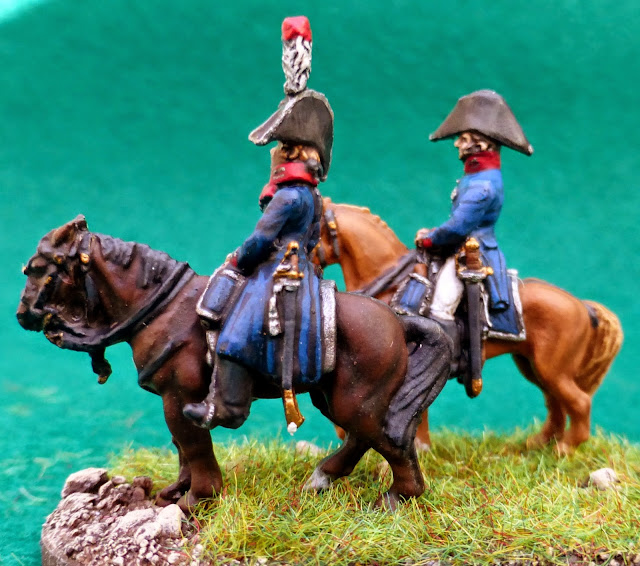 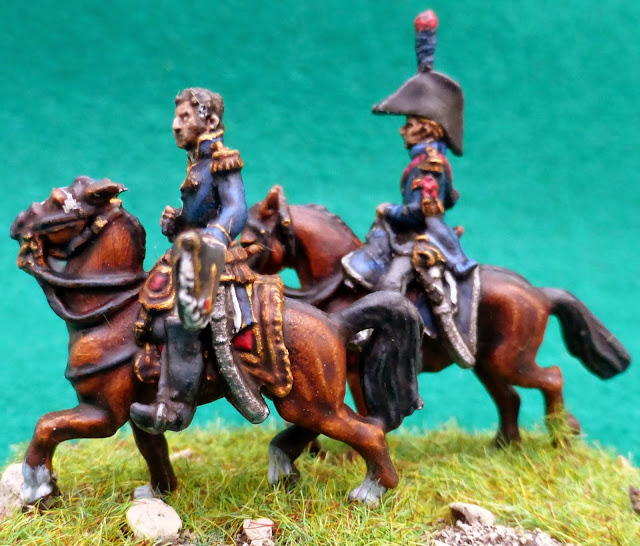 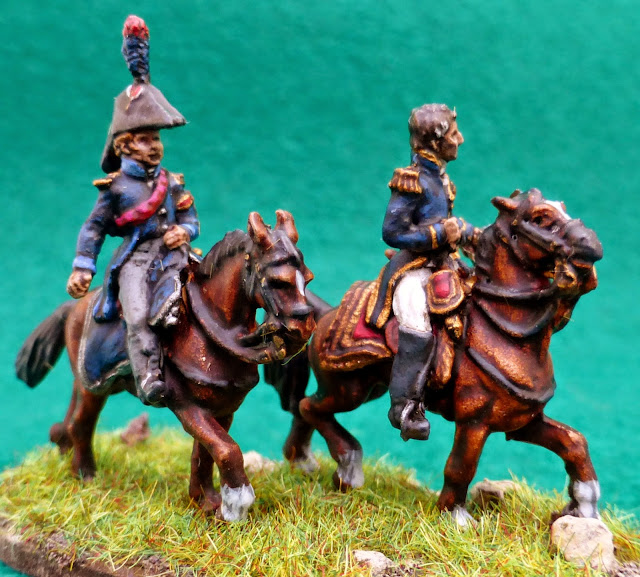 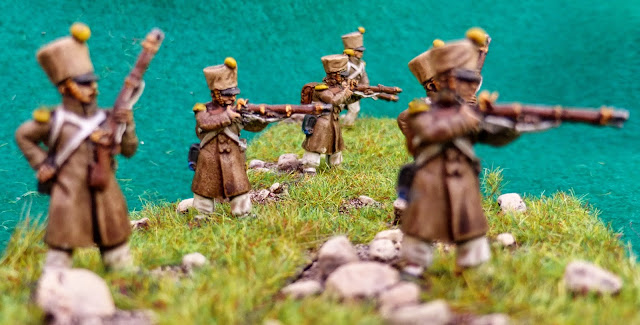 That’s not all though as there have been various rebasings (ugh!) and such, mainly because the devil makes work for idle hands. I’ve rethought a few things, particularly the size of the cavalry units and the issue over grenzers fighting as line infantry and/or skirmishers. The cavalry regiments looked like juggernauts compared to the infantry battalions, particularly Russian and Austrian light cavalry, so they’ve been chopped down to size. As I’m still a Shako II fan as well as scribbling my own set, the four figure squadrons look to represent about 200 men, which is far too many. However, if you reduce the units by 50%, you’ll have 100 man squadrons, which are much more realistic and pretty typical for units on campaign. Once the regiments took the field and natural wastage took effect (stragglers, accidents, detachments etc.), they could be down by 20-25% on book strength. The difference with the ‘standardised’ units in rules like Shako, LFS and March Attack is that I vary the number of squadrons, so French regiments have four (sometimes three) squadrons and, say, Austrian light cavalry in 1809 have eight with proportionally larger strength points etc. Up to now it seems to work, but it does mean that I now have a massively over strength cavalry arm!

By the way, this exercise resulted in a requirement for extra command figures, which is a bit of a problem as some manufacturers can be a bit cagey about filling orders made up exclusively of command packs, if only for the fact that moulds are most commonly made up of a combination of command and line figures. Thankfully, a quick exchange of emails with Ian Marsh (Fighting 15’s) sorted me out and he’s (painfully) going to cast up the extras and chuck the redundant troopers back in the pot. Big pat on the back for him then!

The grenzers presented another problem as nobody can decide once and for all whether they were exclusively skirmishers or line troops or both. They certainly varied in quality though and they appear to have functioned as both types of unit. Added to this, Archduke Charles (Austria’s key player) wasn’t a big fan of skirmishing because they it win battles simply because the units lack ‘weight’. So, extravagant though it may be, my grenzer battalions (and, later, the Russian jagers) are being strengthened with a couple of extra bases each to allow them to function as line or skirmish troops. The first one like this:

Circumlocution
It's likely that the enforced silence will continue for a while with only periodic interruptions as it’s been quite painful typing this. (Type less then, you klutz!) I doubt anyone will pine for the strange ideas and Dickensian sentences. I spend a fair bit of painting time droppnig things and repainting parts because brush control is pretty poor. Over the past while though, being restricted as to what I can actually do, I’ve been thinking many thoughts, including the inevitable “What’s the point?” I don’t mean I’ve been pricing up rope, but over the years I’ve seen people lose the burn for wargames and even become quite stressed about it, sometimes because they’re tired of chasing the impossible dream or even because they feel guilty at the size of the lead pile) or even just overwhelmed by it). So, some things to think about:

Do I enjoy my hobby?
Which part of my hobby is my favourite?
Do I want more than I need?
Am I doing this for myself or to impress others?
Do I purchase more ‘stuff’ to make me feel good or will it lead to more stress/guilt?

These questions are, I think, worth mulling over because they certainly focused my mind. I don’t doubt we’d all answer positively at first, but, later, there’s likely to be the odd seed of doubt. There must be dozens of reasons for blogging about the hobby just as there must be for many of the linked activities. There are people who simply like to paint figures and others who like to collect. I’ve said before that if I’m not interested in the period, there’s no chance of any wargame involvement, which can only mean that the history is a big driver for me.
- May 23, 2015
Email ThisBlogThis!Share to TwitterShare to FacebookShare to Pinterest
Labels: AB Figures, Curcumlocution, Fighting 15's, Napoleonics, Painting, Stuff