OK, stand easy. That’s it for another year.


As I’ve had my chestnuts roasted on an open fire before for not mentioning Christmas, this is a sort of Christmas report. We had a really nice Christmas and mine was certainly one to be chalked up as enjoyable. Food and drink were both good and even the food bank got their share, thanks to the Red Cross parcel. I did the driving on the Eve and the Day so I didn’t imbibe until Boxing Day. Moderation in all things and my speech wasn’t slurred even as I was slamming the neighbour’s head against the wall.

I had an excellent collection of presents, but without a single hobby related item, save for my Secret Santa gifts. One highlight was tickets to see Count Arthur Strong in February.  If you don’t know who he is then see what you can find on YouTube or BBC iPlayer or, God forbid, Pirate Bay. The radio shows are, I think, better than thte TV series, but both are good.

However, the star attractions (and the only ones you’re interested in) were the Secret Santa presents, of which more below, but first a sincere thanks to Ian and Cath Willey and Chris Stoesen who masterminded the scheme and did the organisation. You did a hell of a job. There were two schemes running in parallel, each with a slightly different name, but I’m damned if I can remember which was which so I’ll keep it simple.


Being something of a butterfly, I tend to flutter from project to project and there’s no saying what I’ll be up to from one month to the next. Cath instructed me to put some ideas on the blog to give the ‘Unpainted Secret Santa’ some idea of what to aim at, which was fair enough, but then I wondered about the painted present: what would he/she come up with, having to trawl through all the guff on this blog for ideas?


The result was an absolute cracker of a vignette which I wouldn’t have dreamt up at all: 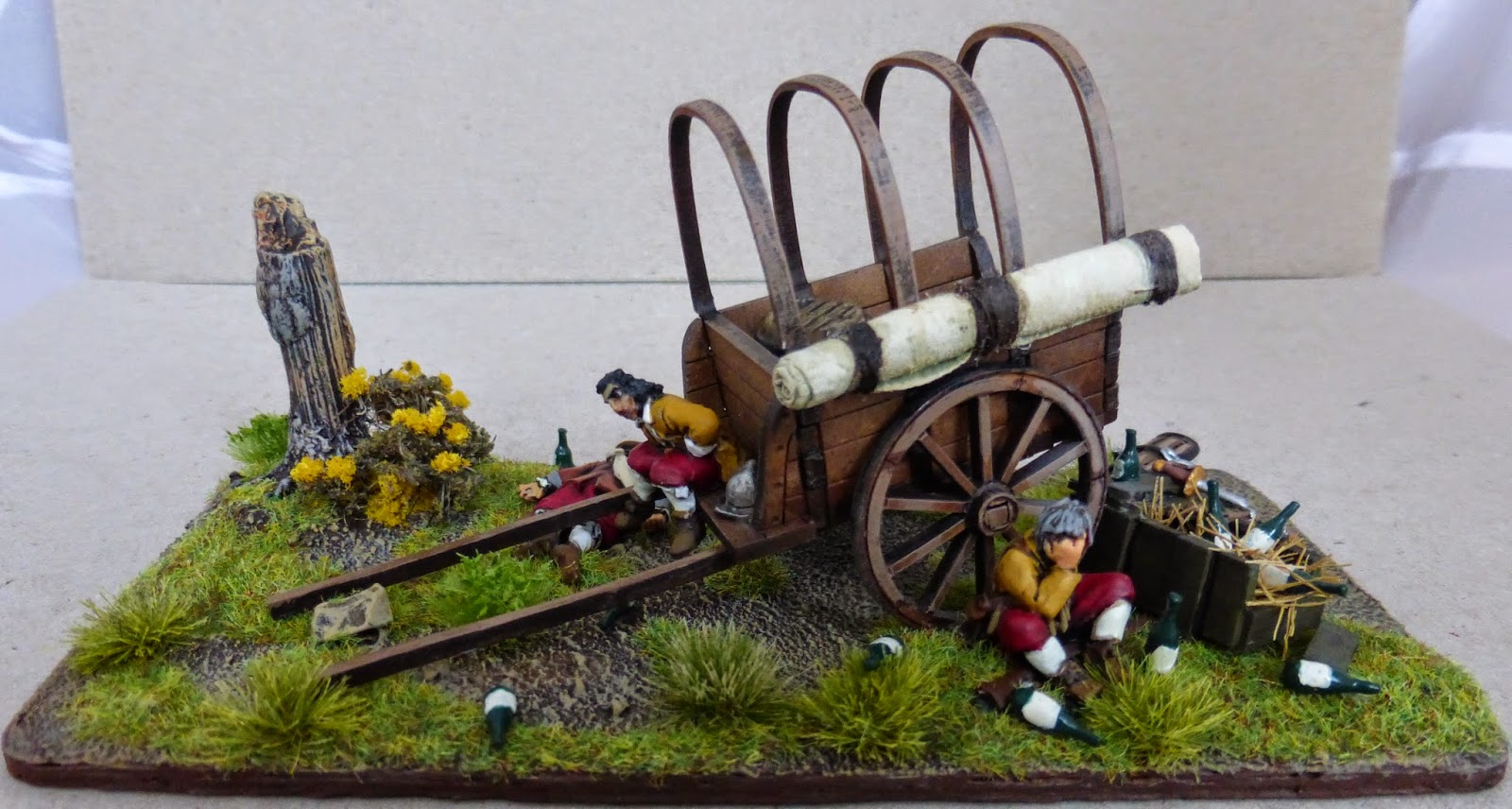 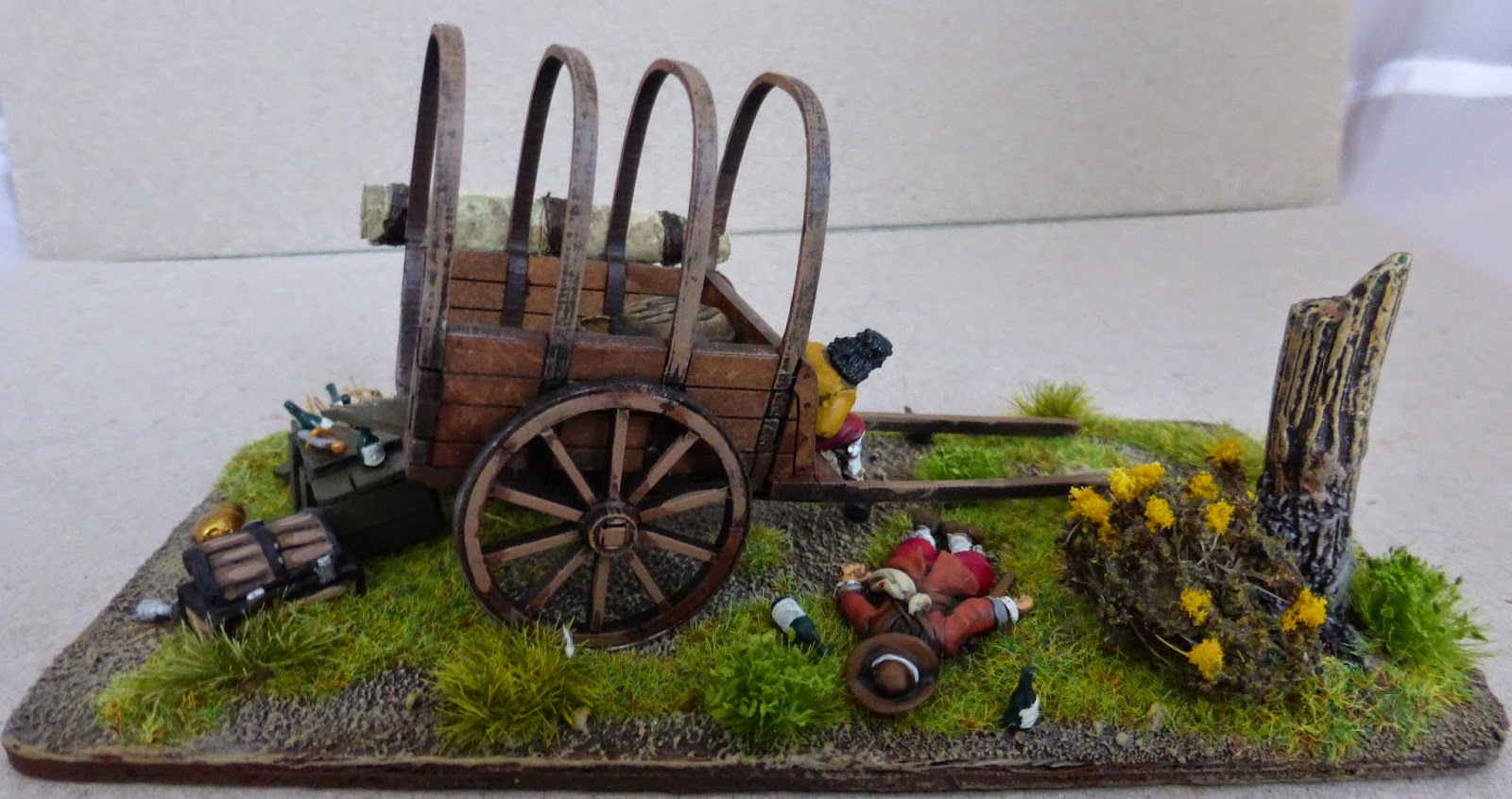 We have an apparently abandoned supply cart which is being protected by three Pike and Shot infantrymen. Naturally enough, they’ve had to make sure the contents of the cart were in good order, but have become a little the worse for wear in doing so. More importantly, they have made sure a goodly part of the contents won’t fall into enemy hands should things go awry.

I have no idea who produced it, but they certainly trawled though the blog and they’ve got a good idea of my interests and sense of humour. Whoever you are (and I’ve got an idea) very many thanks. It’s really appreciated.


As I mentioned above, the unsinkable Cathy Willey suggested that I put a few ideas on the blog to give the secret Santa(s) something to go at. I did this and ended up with a two part gift: something I’d flagged up and something Santa had sent on his/her own initiative. The mounted crossbowmen were off my list and so were to be expected and very welcome – another step towards my Renaissance Italian army(ies). 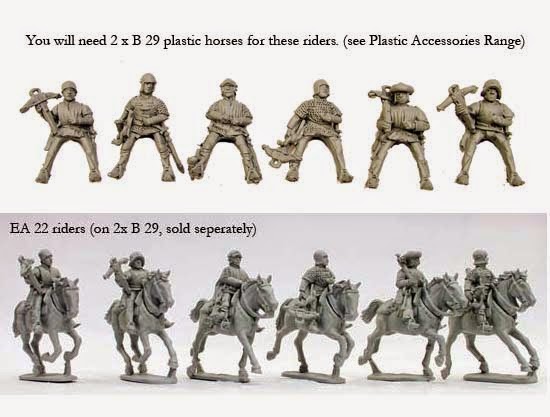 The other part of my gift was a stroke of genius, maybe even evidennce of psychic ability. It’s a set of the Renedra/Perry gabions which, although I already have one set, it dawned on me a  couple of weeks ago that I certainly needed another set to achieve my engineering ambitions. 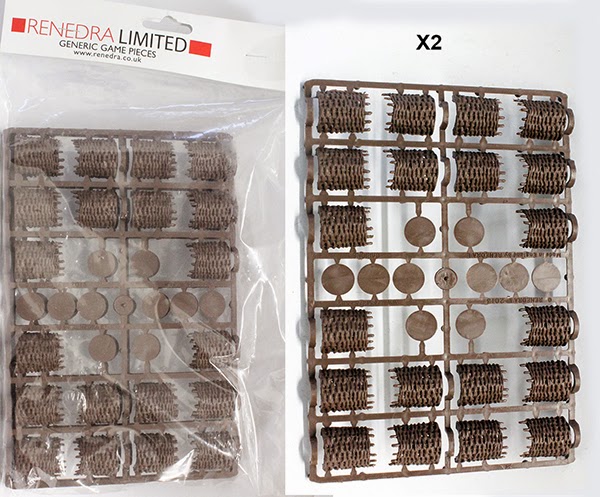 Now that’s what I call a stroke of luck, so another big thank you, this time to the ‘Unpainted Sectret Santa’.

So, I’m well pleased with the SS scheme as it certainly worked out for me. The gifts were as near to ‘just what I always wanted’ as you can get. Thanks again to Cath and Ian and Chris and to both Santas.
- December 29, 2014
Email ThisBlogThis!Share to TwitterShare to FacebookShare to Pinterest
Labels: Christmas, Secret Santa, Stuff