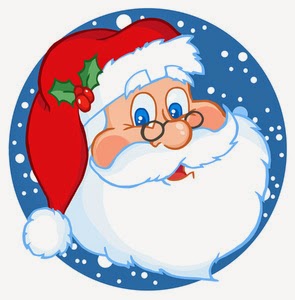 I'm going against all my principles this year and mentioning Christmas even before Autumn has had chance to begin. It's appalling, I know, but there are two good reasons.

First off, I'm participating in Chris Stoesen's '2014 Santa Clause' scheme. Chris runs the Wargamer's Odds and Ends blog and has organised a sort of anonymous gift exchange for Christmas, whereby we each paint a figure or figures for a nominated wargamer for them to open as a mystery gift at Christmas. It's bound to be very popular and a great scheme, so give it a go. Details are here.

At the same time (and without the use of safety nets) I'm going to participate in Ian Willey's increasingly popular 'Secret Santa' gift exchange scheme (details here) which is a sort of unpainted version of the above. Ian runs the 'Blog with No Name' and so, like Chris, will be familiar to many of you.

They're both good schemes and, I think, worth participating in if you can. I'm already quite damp with anticipation . . . .
- September 06, 2014
Email ThisBlogThis!Share to TwitterShare to FacebookShare to Pinterest