Arnhem/Oosterbeek III – The Bridge too Far


The bus follows the ‘Tiger’ (or centre) route into Arnhem which is joined by the ‘Lion’ (southern) route about a  mile out of the town, just short of St Elizabeth’s Hospital. Brigadier Lathbury, GOC Ist Parachute Brigade, had decided to send his battalions into Arnhem by three separate routes ‘Leopard’ (the northern route along Amsterdamseweg), ‘Tiger’ (the central route along Utrechtseweg) and ‘Leopard’ (along the ‘lower road’) in order to give the units a faster transit into the town rather than have to move in one long column. In doing so he sacrificed the ability for the battalions to concentrate if necessary to fight their way through, but he assumed the troops would be in Arnhem, if not at the b ridge before the Germans could properly organise blocking forces. The absolute opposite to what actually happened.

The St Elizabeth’s Hospital was the scene of savage fighting during the early part of the battle, though, obviously, there’s no  sign at all of this now. Initially C Company 2 Para Battalion who decimated some eighty or so German troops who were debussing and about to take up positions as part of the blocking force. Three survivors were taken prisoner of whom two were  wounded. C Company had been detached from the main body of 2 Parachute Battalion (Lt Col J.D. Frost [wounded, POW), went in: 525, died: 57, evacuated: 16, missing: 452) in order to deal with the situation while the remainder of the battalion moved to the bridge via the right hand fork in the road by the river.

Over the next two days (18th and 19th September) three battalions, or parts thereof, tried to fight their way through this area:


I think it’s time to add a short note about what these troops were facing, which might also go some way to account for some of the numbers of missing. The troops who attempted to traverse this area on the lower road and across the grassy promenade by the river were fired on by 20mm anti-aircraft canon from across the river as well as normal infantry small arms and mortars. I’ll quote a passage from Frank Steer’s book ‘The Bridge at Arnhem’:


“The 20mm round was the smallest into which High Explosive (sic) could be fitted, and for which a fuse could be manufactured. It was only a simple percussion fuse and needed to hit its target in order to detonate. However, if it hit a man he exploded. The effect was horrific. If it hit something else and detonated, then it sent shards of steel for many yards from the seat of the explosion causing death and injury.


Should it miss its target and return to earth, this anti-aircraft ammunition detonated on impact, often with unpleasant consequences. To avoid mishaps, once the tracer in the back of the projectile has burned through, an igniter sets of a small charge and detonates the round. This adds further to the cacophony and the danger.”


Despite orders, the centre of Arnhem and the bridge itself were only lightly defended by the time Frost’s troops arrived at the bridge. An attempt by the British to rush the bridge ended in failure. The rest of the events at the bridge are fairly well known.

Once ensconced at the north end of the bridge and having failed to make a crossing, Frost’s force began a hard defence against increasing numbers of German troops. Again, it was a familiar sequence of diminishing numbers of Airborne troops and dwindling ammunition reserves with the necessarily shrinking perimeter becoming choked with dead and wounded. Frost’s force was an amalgam of troops from several formations who had managed to fight their way through to the bridge and it is a tribute to the Airborne that they held out for four days with only a fraction of the strength intended to defend the bridgehead. Nevertheless, defeat was inevitable given the relatively small number of unsupported, unsupplied, isolated soldiers. If the formations intended for this operation had arrived at the bridge as planned and it  had included a coup de main attack at the south side of the river, then I think there’s little doubt that the bridge would have been held until the arrival of XXX Corps.


My tramp to the bridge was certainly as memorable as John Frosts, to me anyway. The bus dropped me back at the railway station from where it’s only about half a mile or so to the bridge. It’s difficult to get lost: head to the river and when you get your feet wet, turn left. It’s the getting your feet wet that was the killer. My ankle was holding up pretty well so off I trotted, about ten minutes before it started to rain. Rain is a natural risk in Holland and a bit of a local joke, like it is in the UK, but this rain was the sort of thing I’d seen in the Far East. ‘Stair Rods’ we call it round here. It rained from the minute I entered the main run down to the Rhine until I got to the platform for the train back to Zwolle. Around three hours later, back at the apartment, I was still able to generate my own little lake – thank God the weather was warm.


Our intrepid explorer made his was down to the Nelson Mandela Bridge, which had originally been the pontoon bridge at the time of the battle, and then west towards what’s now known at the John Frost Bridge. The route I chose avoided the more open areas by the river and took me a block to the north. This brings you through the western section of the Airborne perimeter and, had there been any of the original buildings remaining or even the original street lines, I would have passed on my left (in sequence, west to east)


HQ 1 Anti-Tank Battery, Royal Artillery (opposite the site of the westernmost 6Pdr), a line of company and battalion HQ’s and ending with the 1 Brigade HQ and Defence Platoon with the northernmost 6Pdr. You’re probably walking along the location of the mortar positions. 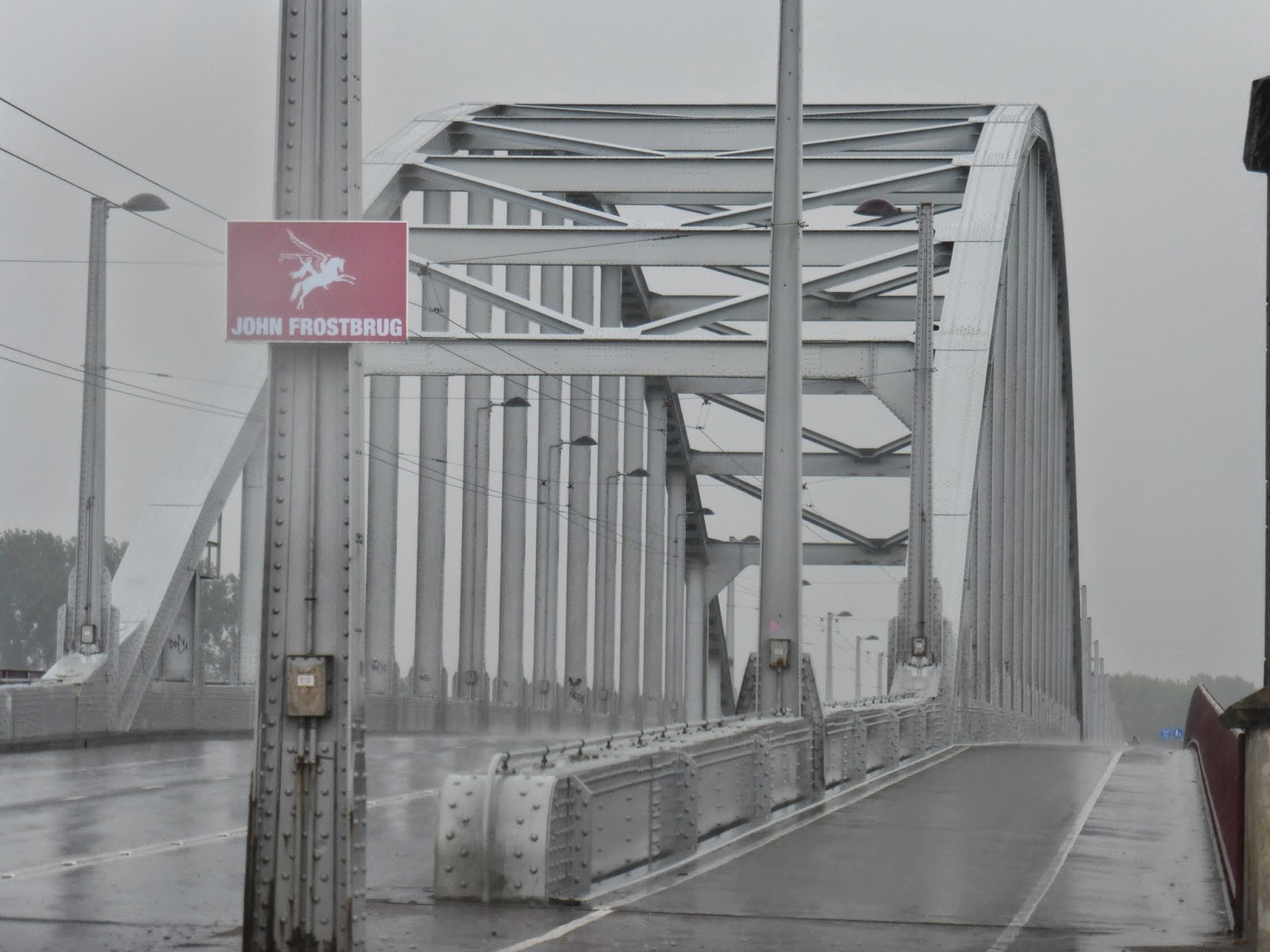 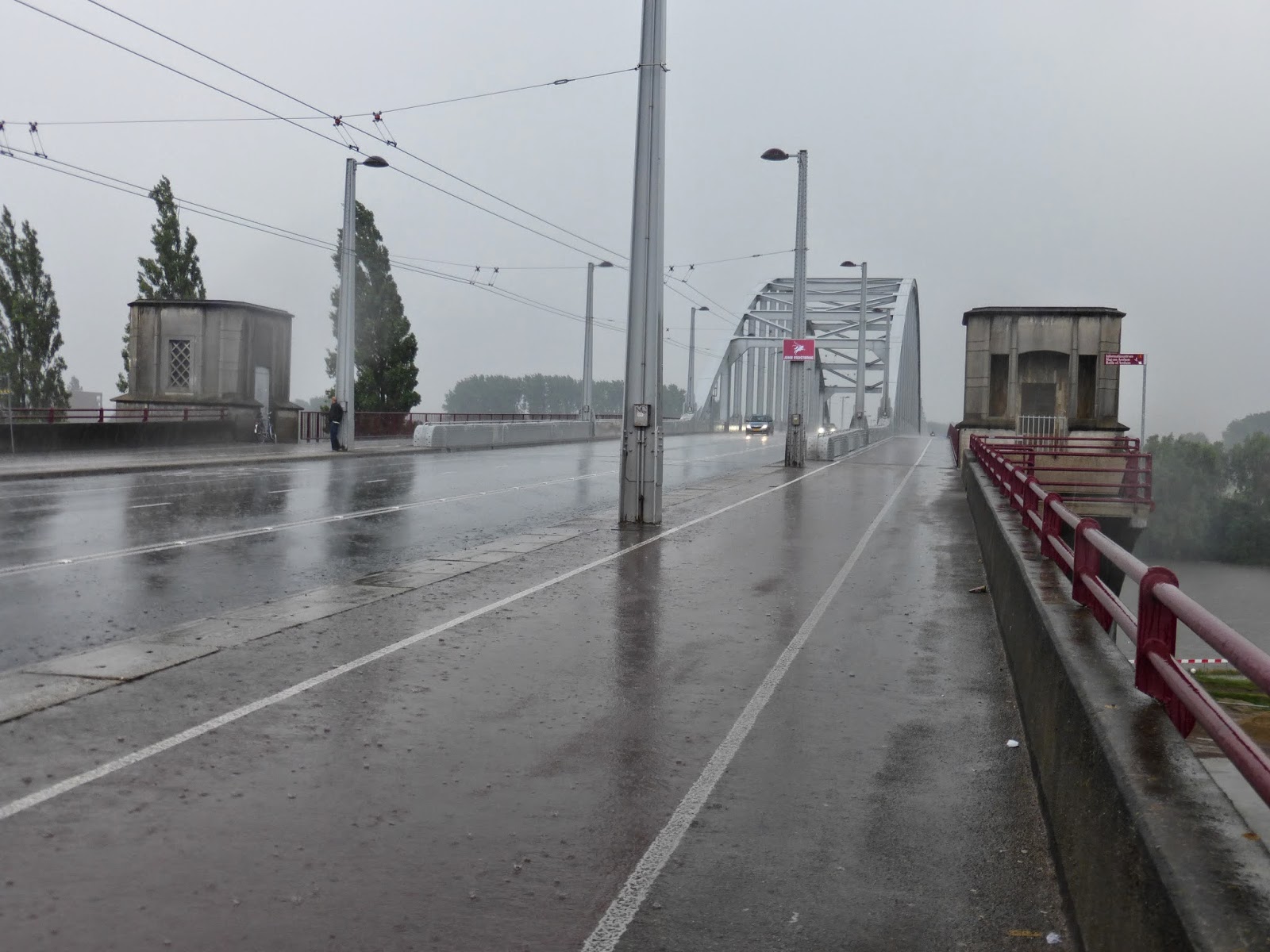 Two views of the bridge which, although rebuilt after the war, is pretty much a replica of the original bridge (which itself was a  replacement for one destroyed by the Germans in 1940 and only opened in August 1944!). The second photo shows the towers which were variously reported as  being bunkers etc. 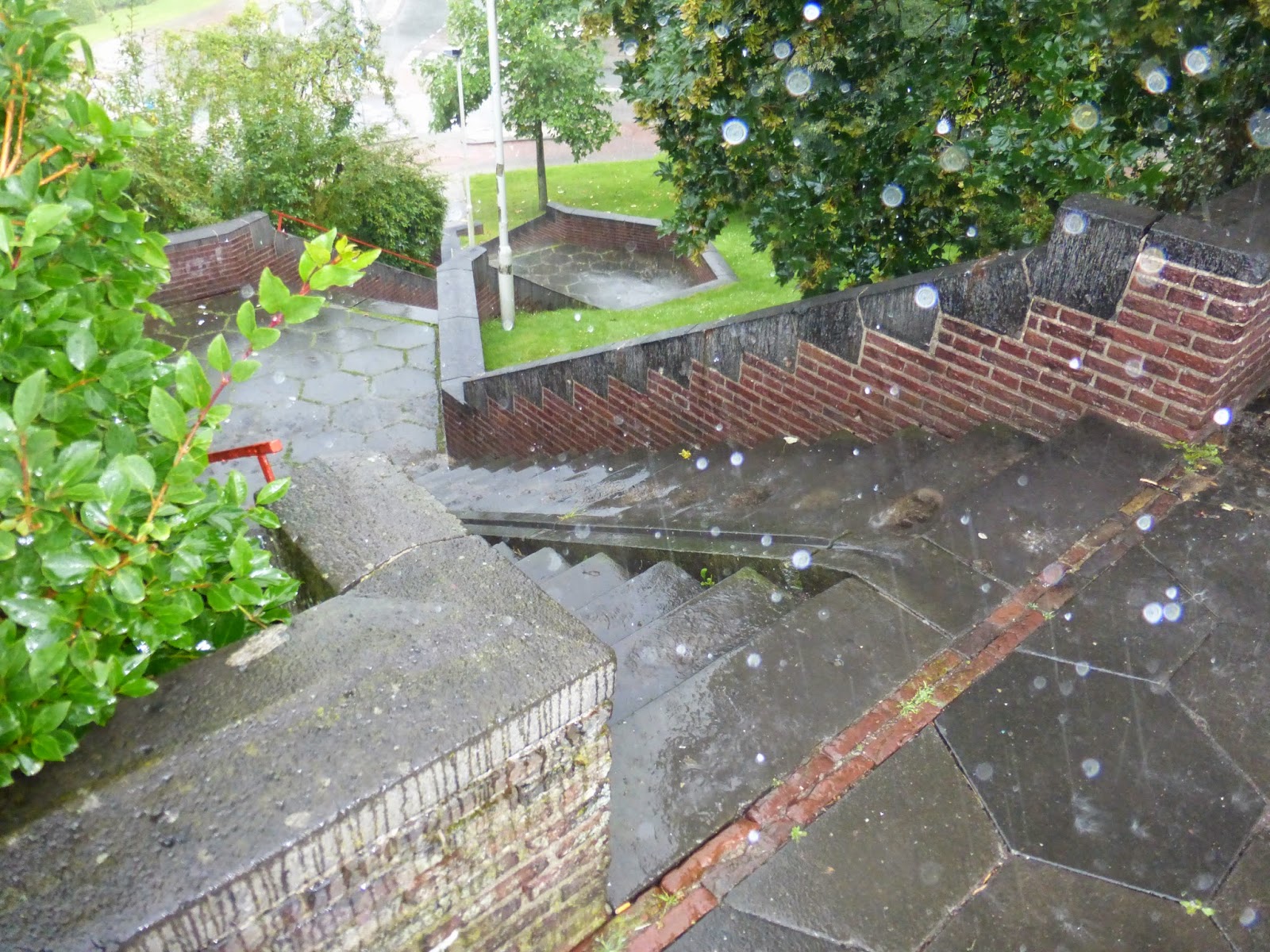 The steps which lead to the bridge ramp and to the approximate area of the destruction of the bulk of the vehicles from the 9 SS Reconnaissance Battalion. 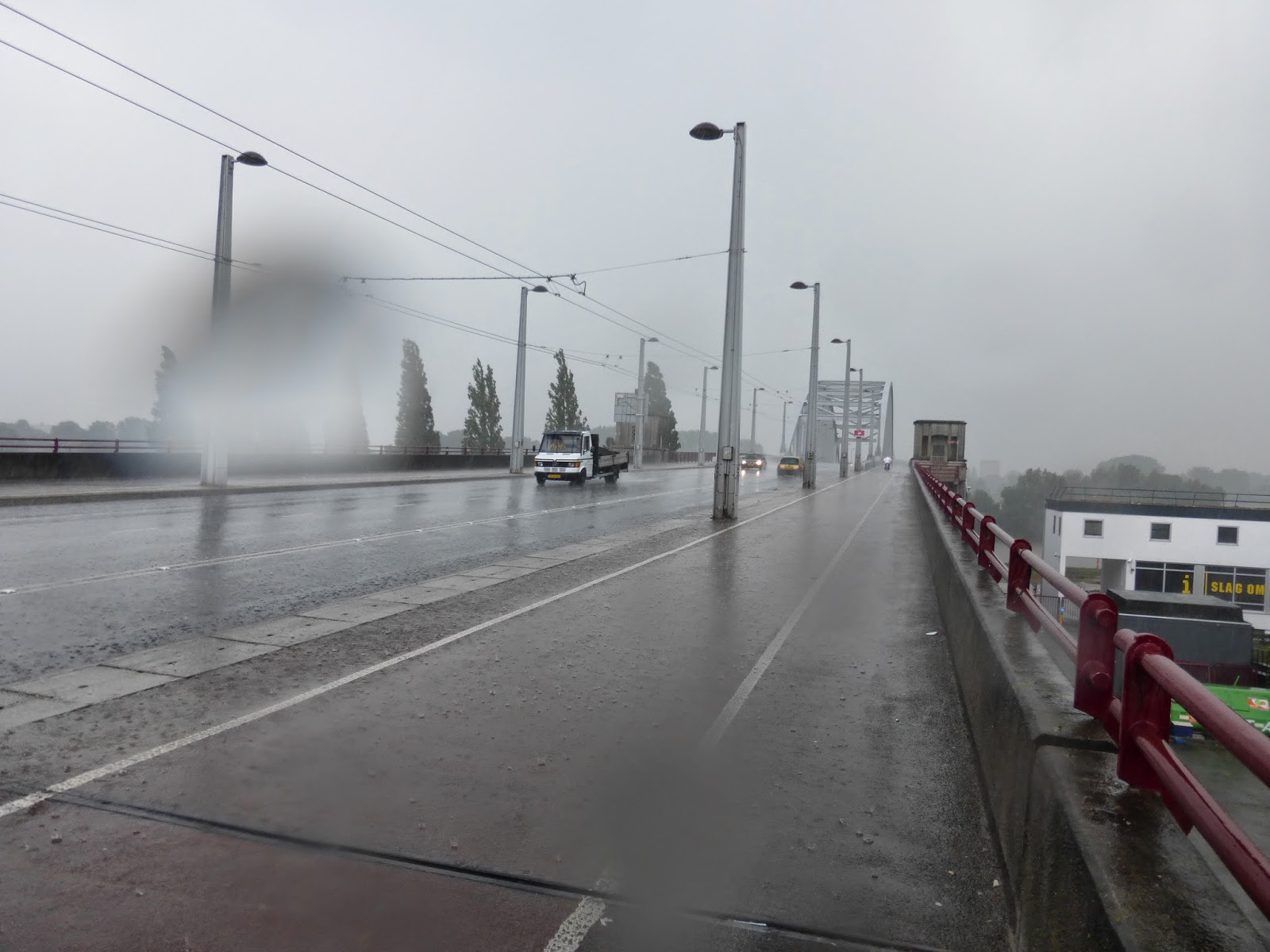 View of the area in which over half of the vehicles were destroyed and below an aerial view of the same situation during the battle:

Finally, I went down beneath the bridge to see the Airborne memorial: 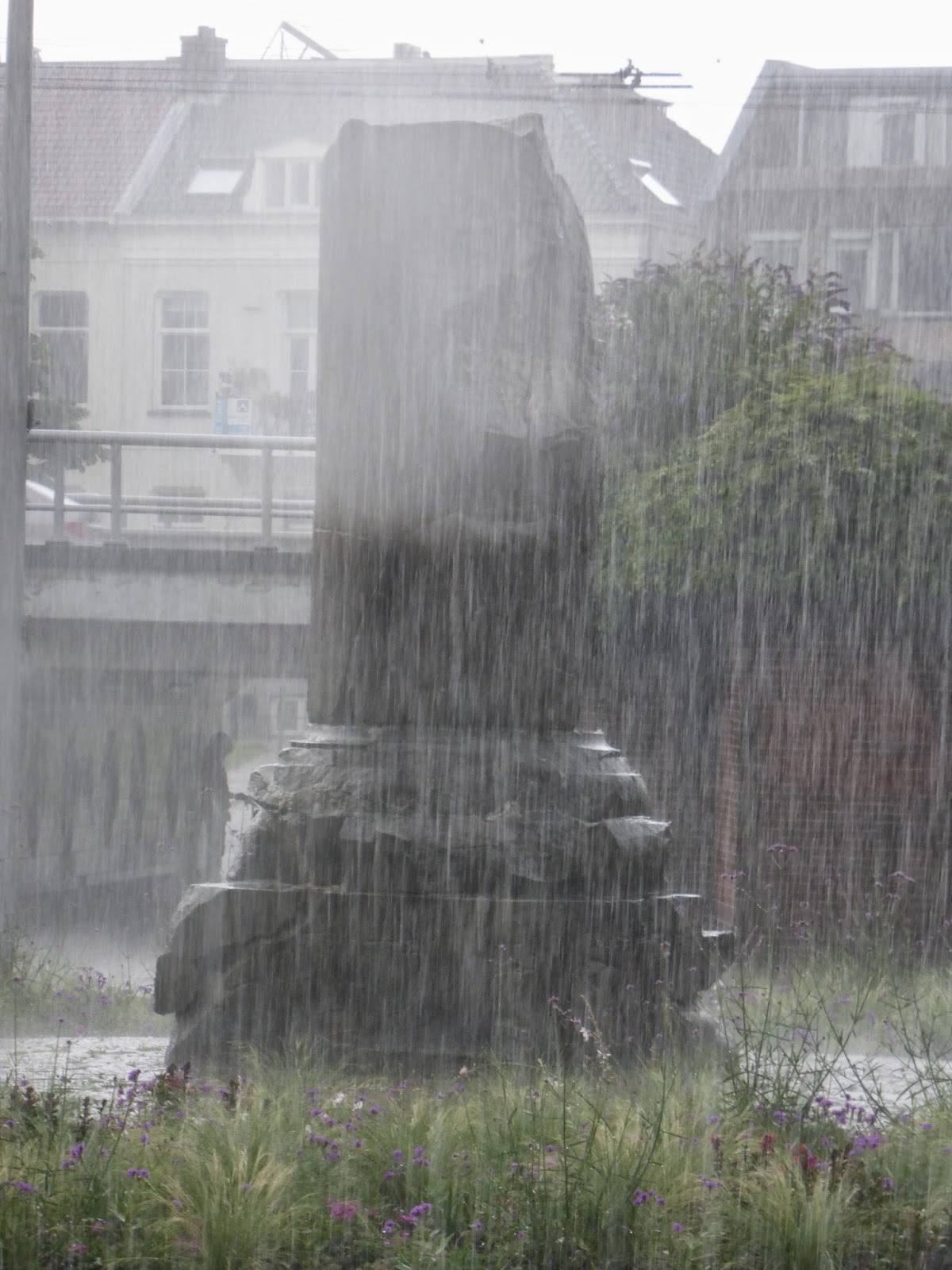 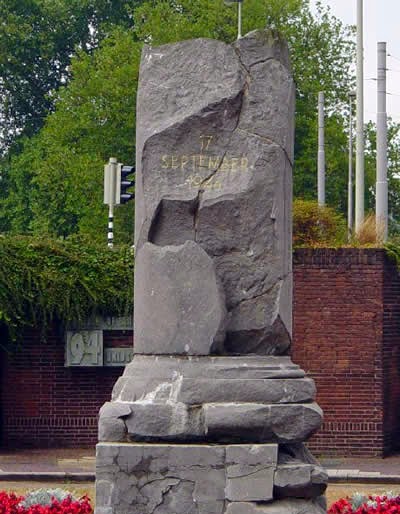 This was the point when I decided that honour had been satisfied and it was time to head back to the station. The only vehicles on the road were two buses (one of which stopped to let me cross - decent chap) so the slog back up to the station was easy. Unfortunately Arnhem station was flooded which explained the crowds hanging round the bus station shelter and the strange 'rushing' sound which turned out to be a waterfall down the steps to the underpass to the platforms. Unfortunately it also meant that all the shops were closed, so no scran for the journey back, at least until Zwolle. So, that was  that: get on with it and wade through. Check the timetable and then up to the platform.

Next up are a few thoughts about the trip and some questions about the campaign and the battle then a session on the wargaming aspects of it all. Stay tuned . . . .