It's History Jim, but not as we know it!


Last Friday I had a nice visit to the hospital to have my left knee scraped out. The actual term used was an arthroscopy (medial and lateral meniscal tears), which, in my father’s language, would have meant have a shufty and sort it out. And sort it out they did. As a consequence, it’s now Tuesday and I still enjoy limited mobility and considerable discomfort. You’ll guess by this that I’m using some of the phrases in the hospital’s advisory notes for torture victims. In many ways I’m not dissimilar to the old lady in Alan Bennett’s “A Cream Cracker under the Settee” monologue.

I’m not bothered about visits to the ossie (lingua franca here) because there’s not much to be worried about really as there’s nothing you can do about it anyway. You turn up to be healed, but if you do take a turn for the worse and go west, there’s no complaints procedure for that. My only fear is that I miscalculate on my reading material and end up twiddling my thumbs.

Just out of interest, the theatre sister (who I first met last November when the starboard knee was being careened) is really nice and a real character.  She’s not long come back from a three year stint in Somalia working in a field hospital where they cleared up after al-Shabab and other assorted Jihadists. There’s not much fazes her . . . .

So anyway, I’m not able to paint much as I have an irresistible urge to fidget quite often so I thought I might as well put up a few photos of the ECW figures I started a couple of weeks ago. They’re the command element for Sir Henry Bard’s regiment of foot (or foote if you still think the King James’ Bible is a novelty). They’re variously listed as whitecoats or greycoats and I’ve seen photos of their re-enactors in red too which is possibly to reflect their time in the Oxford Army (so some of them may even have ended up in blue too).

The regiment was a northern unit raised in Northumberland, originally commanded by Colonel Thomas Pinchbeck (so you’ll see it referred to as his regiment prior to it being taken over by Bard). It arrived in Oxford in May 1643, still under the command of Pinchbeck, where half its strength was told off to form Lord Henry Percy’s foot (not to be confused with his father Henry Percy, the Duke of Northumberland, William Cavendish, Duke of Newcastle or Mike Chisolm who I was in the navy with and has nothing at all to do with this story). Matters were made easier when the King made Henry P. Junior Baron Percy of Alnwick. (As an aside, Percy’s ancestral pile was used much later as a location for the Harry Potter films.) Thankfully, friend Pinchbeck copped one at the First Battle of Newbury (though it was just known as the Battle of Newbury at the time as the second battle hadn’t taken place yet) and the full regiment came under Bard’s command, thank God.

It then fought at Cheriton Wood, where is seems to have made a complete arse of itself, and later at Lostwithiel and the Second Battle of Newbury (which meant that Pinchbeck could then claim to have been offed at the First Battle of Newbury, assuming that there is life after death or Strictly Come Dancing). Anyway, the lads were merged with the remnants of the Queen’s Lifeguard (of Foote) then went into garrison at Campden House. It may have been about this time that the regiment became a wholly musketeer unit, but, frankly, nobody really gives a toss. The regiment was finally put out of its misery at Naseby where all of its colours were captured, allowing Flags of War and GMB to make accurate reproductions for wargamers.

I’m not normally this passionate about the genealogy of the ECW regiments, but most of the people who’ve produced potted histories of this unit seem to have had at least partial lobotomies. 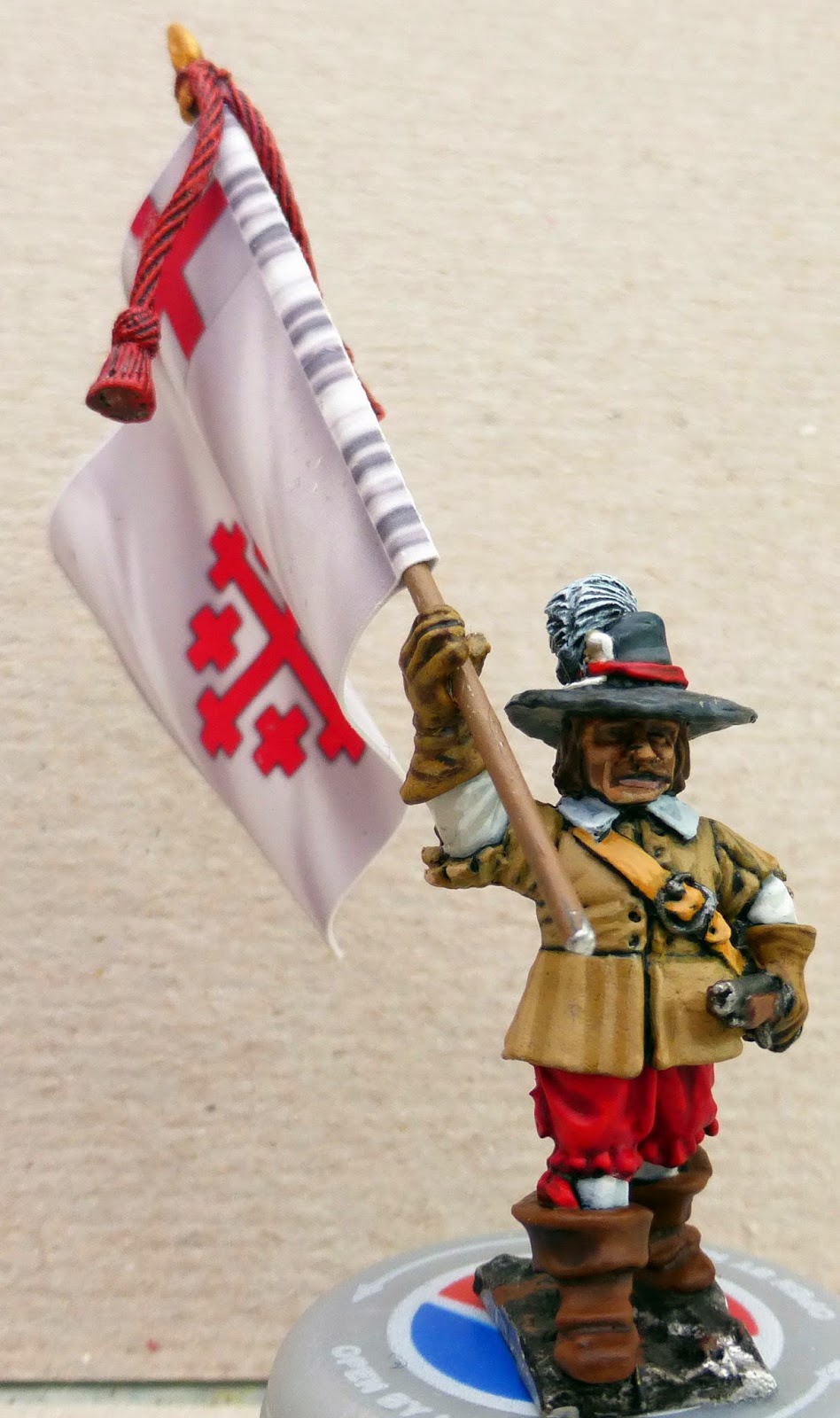 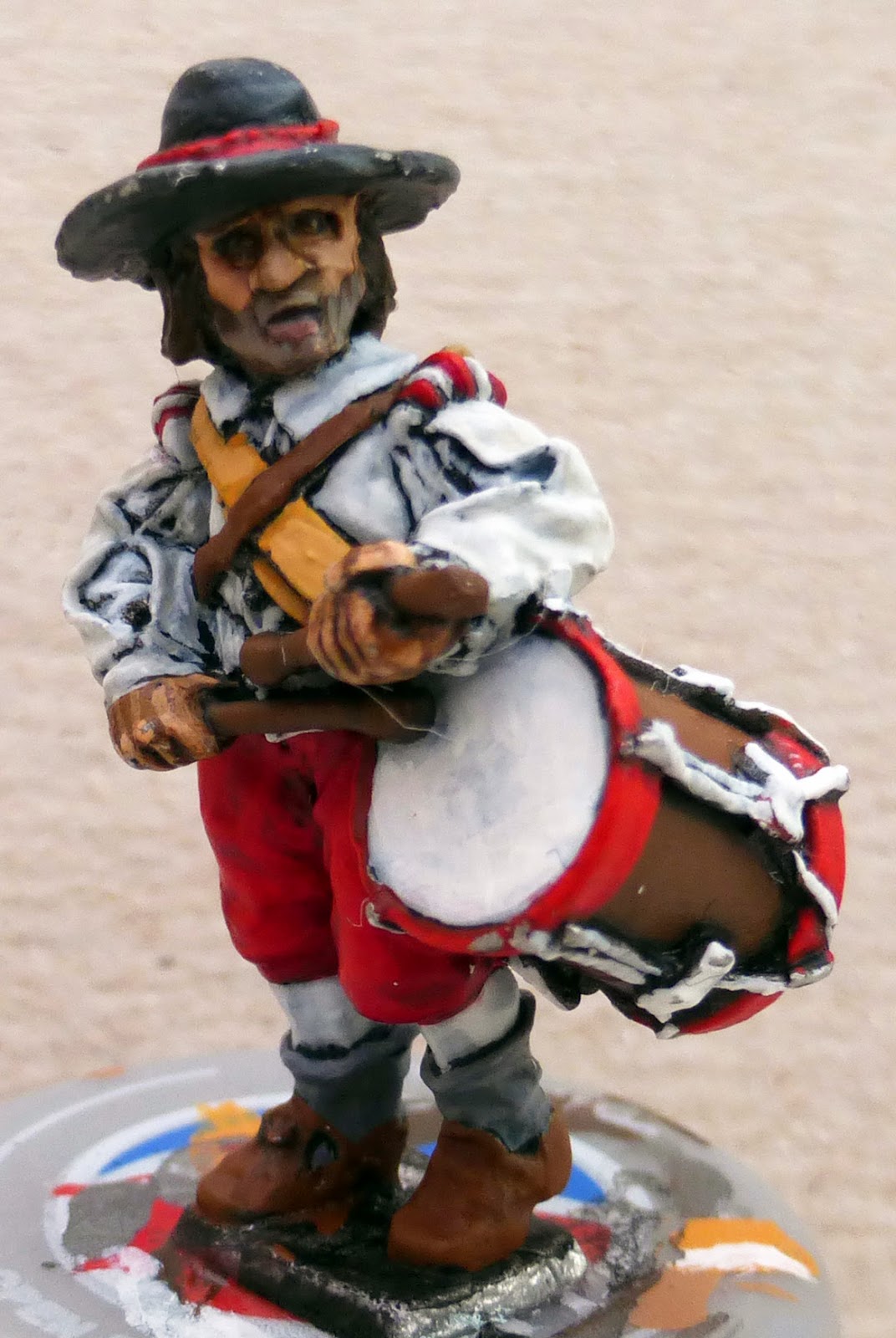 The uniforms are a little fanciful, but, as a command group, I feel they ought to standout somewhat. The rest of the regiment will be much less colourful. The figures are all Foundry and pretty poor at that. They may have rediscovered a huge quantity of old moulds, but the ECW ones seem pretty much worn out. Many of these figures are of the ‘carve your own’ variety. Also, the flag poles are far too long, but this is a conscious choice for ease of mounting on the figure. I may trim them back later when I do the final touching up.