Sometimes the thoughts in my head get so bored they go for a stroll through my mouth. This is rarely a good thing.

Finally got over the mother of all colds with just a cough like a sixty a day man to shake off now. However, I've done a bit of dabbling – mostly touching up – and a bit of a stock take. At my present rate of knots I'll be about 170 when I get everything up to date and tickety boo with the existing projects, which makes me wonder what to do about it. Being essentially a solo gamer, I have to build both sides to a conflict. This is no big problem because before I went back into the closet, I still tended to hanker after periods which weren't, for those days, mainstream.


I got through the Ancients itch which was only finally killed off primarily by pretty tedious rules that seemed to be engineered to design out the 'rule lawyers', but then by reflecting on the character of many of the opponents I met. Everything seemed to be a clone of the latest WRG thinking (still is to an extent) and quite a few of the players knew lots about the rule mechanisms and precious little about the history. Oh yes, and they also knew about the drive to win. Just as King Arthur's knights went in search of the Holy Grail, so Ancients wargamers went in search of that elusive killer army fueled by the previous year's army statistics from the WRG and reports/rumours of who won what with which troops at such and such a convention. Sassanids, Seleucids, Late Romans, every Byzantine army combination imaginable; they all had their time in the sun. They might just as well have been playing Tiddlywinks as historically based wargames. I can only say “Your mother was a hamster and your father smelled of elderberries!”

As usual, I digress. So, the upshot of all this cerebral activity (well, moderate cerebral activity anyway) has been to actually focus on a couple of things and let the others barge in as and when. While I admire those gamers who drive forward in the relentless pursuit of a particular project, be that simply a new force for skirmish gaming or the development of a demonstration game for the circuit, I'm not wired that way. I like more than one pot on the hob and the ability to chop and change if I get the impulse, though I do have just enough self discipline left to grind away at a particular job.

A job I'm grinding away at presently is the start of my WSS project. I got through it once in 15mm, but it didn't give any satisfaction. However, the 'Beneath the Lily Banners' rules and the release of the Ebor figures provided another spark. Unfortunately, I think I might have come unstuck by deciding to focus of the 'boring' French first. Good armies and nice enough uniforms, but the fire won't catch. Nevertheless, I'm slowly battling on and I'm (still) working on my first regiment.  I've added some photos to the brief outline. They're not tricky, just front and back views of the foot officers: one for each battalion. The mounted figure is from Warfare Miniatures (the League of Augsburg lads) and the foot figures from Ebor. They're a bit sloppy, but they look good in the flesh.

This regiment effectively came into being on 14 August 1675 when, following the death of its colonel, the Turenne regiment was given to Louis August de Bourbon Duc du Maine, the most favoured of Louis XIV's bastards. As Le Duc was only five years old at the time (a practice not unusual for the period), Roger Brulart de Sillery Marquis de Puysieux was appointed as Lieutenant Colonel and took command in the field. He was succeeded by Henri d'Harcourt Marquis de Thury on 19 December 1679 who was in turn replaced by Marquis De Seguiran this could be him: 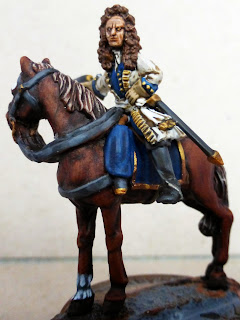 The regiment spent the war against the Dutch and the nine Years' War fighting in Flanders and western Germany where it also spent the opening years of the War of the Spanish Succession until De Seguiran was killed at the Battle of Ekeren in 1703 The regiment received a new colonel, François Arnauld de Courville, and departed for Spain with Berwick, arriving at Vittoria on 2 February 1704 for the opening of the campaign against Portugal. 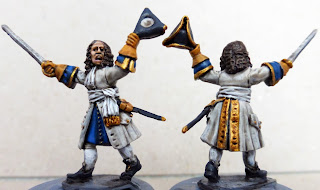 De Maine was particularly active in this theatre and operated in several regions undertaking a variety of tasks from open battles and sieges to anti-guerilla operations against the Miquelets (an irregular militia). It didn't do so well at the Siege of Gibraltar in 1705 ;O) 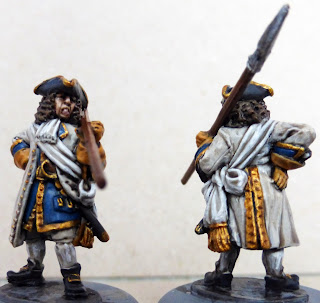 De Courville was mortally wounded during the daring capture of Ajora Castle in April 1707, after which De Maine was commanded by Lieutenant Colonel Alexandre de Dammartin Marquis de Belrieux, under whom it played a key role in the Franco-Spanish victory at the Battle of Almansa on 10 May 1707. 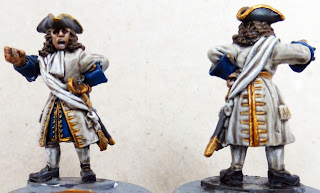 In July 1709 the Maine was recalled to France in order to guard the Dauphiné. In 1710 it turned to Flanders and in 1711 it was in the attack of Arleux. In 1712 it distinguished itself at Denain and in the sieges of Douai, Quesnoy and Bouchain.In 1713 the Maine regiment was in the last siege of Landau, the battle for the works near Freiburg and finally the SIege of Freiburg. On 15 November the regiment d'Aunay and d'Epinay were incorporated into the regiment. On 5 January 1715 the regiment of the Marquis de Valence was incorporated. In 1718 the Marquis de Valence became Lieutenant Colonel. 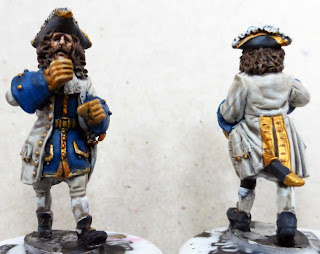 That's it for the period I'm interested in, but its descendants fought at Fontenoy, Essling, Wagram, Leipzig, Verdun and the Somme. Not a bad unit considering I only picked it because of the nice flag!  By the way "Du Maine" and De maine' seem to be interchangeable. I'm not sure why: possibly "du' was older style usage?
I'll finish these two battalions and then maybe do a 'foreign' regiment before returning to the white coated French line.
- November 16, 2013
Email ThisBlogThis!Share to TwitterShare to FacebookShare to Pinterest
Labels: Ebor Miniatures, War of the Spanish Succession, Warfare Miniatures