Rambling: you don't have to read this.


I occasionally have repetitive or even sequential dreams which are a sure sign that I'm about to come down with something. Very useful, but the 'something' covers a wide range of ailments. Anyway, I've been having these for a week or so which turn out to be a harbinger of a possibly terminal affliction. I also have other warning signs like my obscenity quotient rising to a level sufficient to make a Bo'sun's Mate blush and a tolerance level which plummets through the floor. Example: Chris insisted on making a raid on Aldi today as part of the shopping exped. Going to Aldi on a Friday is like being in Blackhawk Down, but with more violence. You actually need a helicopter anyway because there's nowhere to park. After about two hours she spotted a space and made a dash for it, but gently (and I mean gently) brushed against the wing mirror of the car in the adjoining bay. I say 'in', but I've seen abandoned cars dumped with better parking skill. The driver shouted something: Chris apologised but I told him to get £@<&€§. I won.


So, by last night/tonight I had a ranging fever. It must've been about 150C – the sort of thing that gives vulcanologists wet dreams. I flaked out at 00:08 (can't help it, it's a navy thing) and had a really odd dream. I picked up the thread of not one, but two of these sequential dreams and, two hours later, had written and produced two radio plays. Quality stuff too like those on Radio 4 that nobody listens to. The storylines are fading now, but they were pretty good, if I say so myself.


So, now wide awake, I begin to think of the old shoes and ships and sealing wax, of cabbages and kings. I had a think about my funeral, which I do now and again because my mother died very suddenly and my father died after quite a period of infirmity following a stroke, Consequently, both their funerals were sort of off the cuff as far as the service went. I've always thought “Not for me Jack.” and let my immediate family know my ideas. Currently the music includes 'Solsbury Hill', 'Eternal Father' and, as the curtain closes, 'Please Don't Talk About Me When I'm Gone', but that'll probably change. I also plan to do my best to snuff it between mid November and mid February when the weather's at its worst and have the will read on the centre spot of an empty Old Trafford Stadium to show how bloody insignificant we are. The acknowledgement in the Evening News (complete waste of money) will also list all those who were invited, but obviously had something better to do. Nothing wrong with a bit of spite from beyond the grave.


I even managed to have a think about wargames and I've decided to bin the 'I'll do my own Napoleonic rules' project (probably a 'for the time being' thing) and settle for Le Feu Sacre, which, although I'm not entirely confortable with some of the game modelling, will satisfy my needs. I'll also finish that bloody Austrian regiment tomorrow and get on with something more interesting like the grenadier battalions and more grenzers. I'm planning to get some of the Blue Moon Austrian and Hungarian infantry because I just can't face more Battle Honours infantry than I've got waiting to be prepped and some French infantry in great coats because they're easy to paint, historically accurate and less boring than the most tedious uniform of the Napoleonic Wars.


I'll keep the ECW rules on the boil and crack on with the figures, but my Italian Wars project is waiting for a slot in the painting schedule. I haven't actually got a painting schedule, but I don't want to sound a complete klutz.


The ACW jobs (15mm and 28mm!) will just be grabbed as and when. I've little or no self discipline these days, but they're an understanding bunch of lads and don't hold grudges (but what am I going to do with 6 regiments of zouaves?). The rest of the crap stuff will probably end up on the give-away in November(ish).


Ah there you go. I can think of at least a couple of you who've suddenly come to point like an old gun dog. Yep, I'll do one in November because:


It's a significant birthday (for everyone else but me, it seems).


I haven't done one yet.


I really do have some rubbish to shift excellent wargaming goodies to redistribute.


Now, there seems to be an undue amount of concern among some bloggers about how many hits they receive and numbers of followers etc., which leaves me a little bewildered. Going back a few weeks there was a debate about why one blogs and what one gets out of it. From what I can remember, nobody mentioned anything about followers or hits, so I wonder what the worry is for. It's good for the ego to have lots of followers and an embarrassment of hits (there, I've said it), but unless you're running a business via your blog, I'm otherwise lost. Anyway, I've added some ridiculous labels to this post to see if they really do have an influence on the number of hits.


Now then, Quick puzzle: Look at the photograph below: 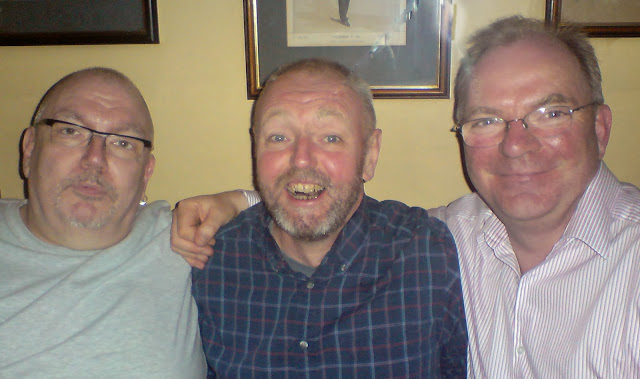 
two are wargamers and one isn't;


two are motorcyclists, but one isn't;


one was in the navy, one in the marines and one a confirmed civilian;


You have to sort out who's who and the ones who get it right will receive a nice little something as a prize. (Should be safe there then!) If you can't work it out then you haven't been reading this blog for long enough and you can't use Google. :OP


- October 05, 2013
Email ThisBlogThis!Share to TwitterShare to FacebookShare to Pinterest