The Other Partizan (Actual)

As you might have guessed, I went to the show today and had a good time of it. Had some great chats with traders and also bumped into some old mates as well as the 'regulars'. Overall the show is never as hectic as the Spring event, but it was quite busy and the traders seemed to be there to the death, which is always a good sign.

Spotted Mike Siggins, though didn't get a chance to speak to him, but then he's probably been badgered to death over his 're-evaluation' comment. And that's about it for the glitterati, although someone said they'd seen Neil Shuck there as well.

There were some excellent games on show and it would be churlish of me to single out any in particular, but, as it's my blog, I can do what I like! The VBCW demo game was good and seemed pretty fast moving, but, by the time I managed to get back to it they seemed to be on a long(ish) break. However, they're perennials, so I'll see them again at the Spring show.

I don't really 'do' Ancients anymore, but there were a couple of very nice looking games on and overall the tables were to a pretty decent standard. Certainly not a disappointment for any of them. However, the best games from my point of view were what I call 'The Curse of Louis XIV': the League of Augsburg demo and the Northstar display. (I say curse because that feller has cost and will continue to cost me a fortune in projects!) Both were enough to make any real wargamer quite damp with excitement. Plenty of very well painted figures and excellent terrain (the trees on the Northstar board were superb). Unfortunately, I didn't get as many photos as I really wanted because I ended up yapping too much, but here are the League of Augsburg shots: 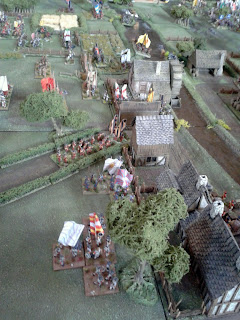 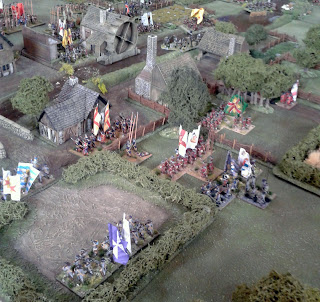 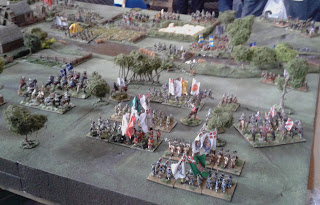 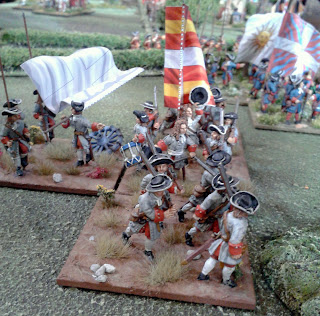 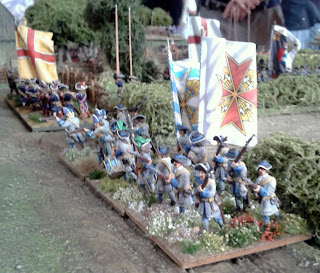 And here is the ONE of the Northstar board (it's Dave King's fault!): 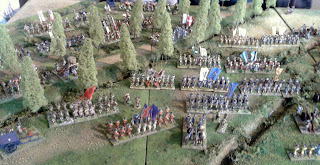 A goodly few of the figures in this game were painted by Dave Woodward ('Paintermeister'), but who doesn't do much commission work these days, which is a loss.

Just a point of interest (which I didn't get chance to confirm): the Warfare Miniatures stand (League of Augsburg's figure range) had some packs which aren't listed in their online catalogue. I'm assuming they're brand new releases, but who knows. They were VERY nice figures though as were Nick Eyre's 'Northstar 1672' figures.

Which brings me on to the traders and anything interesting. Well, yes, there was lots of interesting stuff and I could have spent a fortune. I didn't, but I only put that down to my iron will and the self  discipline of a monk with the clap. Things which did catch my eye were:

Redoubt had their civilian sets (four periods, I think) on display and they were very good. Certainly worth considering.

Foundry had some sets which either I hadn't noticed or which look far better in the flesh. They also had some blisters which aren't listed yet on their site. They were selling their blister packs for only £10 each. Something to bear in mind if they're at a show you attend, even if they can't spell 'independence' correctly . . . .

Pete ("Look into My Eyes" ) Berry of Baccus 6mm had a support act in the shape of a painting workshop for 6mm figures by Dr Mike Salway which was excellent. He almost convinced me to get my Late C19th project off the blocks after a mere fifteen years or so. However, I couldn't let Pete know he'd finally won!

Andy Copestake's Old Glory stand had a revelation for me in that I finally noticed they do Landsknechts in pluderhosen as part of their 'Wars of Religion' range. They look really good and, as OG figures can be a bit hit and miss (often miss), I think these are worth an investment.

Anyway, that's enough name dropping for one day. There was plenty of other stuff worthy of mention, but this isn't a review page and I'm sure there will be show reports on several blogs and elsewhere so I'll be on my way.
- September 02, 2013
Email ThisBlogThis!Share to TwitterShare to FacebookShare to Pinterest
Labels: Shows