Well, it's been a really strange couple of weeks during which some sad things have happened and some odd things too. For instance, I've lost/mislaid THREE memory sticks. I can't have actually lost them, but I have no idea where they are. Naturally, they contain various rule rewrites, notes and such as well as some photographs so I'm more than a little agitated about it. This being the case I'm going to have a bit of a change and scatter “A man walks into a pub” jokes throughout this posting because a) I feel like it; b) it's my blog and c) I feel like it. In any case it's the Edinburgh Festival.


So an American tourist walks into a pub in Edinburgh and asks for a beer. The Barmaid says “That's thrrrrrree pounds thirrrrrrrty pence please .” The tourist says “Gee, I like the way you roll your r's.” and the barmaid says . . . . (wait for it . . . .) “Och, it's ma high heels.”


Rob on his 'Independent Wargames Group' blog has started a hare running with the simple question of whether wargaming is ethical with the secondary question: does wargaming glorify war? It's prompted by part of Mike Siggins' regular feature in Miniature Wargames. Every so often this debate resurfaces at a variety of levels and usually generates a fair bit of agonising and hand wringing, wailing and a gnashing of teeth and a beating of breasts. However, given the number of off pat responses this issue generates when it's raised on sites like PMT, think it's just hokum. I'd hazard a guess and say that a fairly high percentage of wargamers are aware that their hobby has a potentially unpalatable nature.


It's probably a good idea here to differentiate between the professional wargamers who devise simulations for the armed forces, including the people who have to play in them as part of their training (basic and ongoing) and those who wargame (at whatever level and in whatever genre) as a recreational activity. I think it's pretty clear that I'm only discussing the hobbyists here: national defence is an entirely different aspect.


I'm inclined to agree that wargaming does glorify war. If it didn't, we'd all have settled for Chess or Go and had done with it long ago. Playing with toy soldiers and reconstructing the full panoply of war is much sexier than a chess board, but let's have a look at some of the arguments more frequently offered in support of the hobby as an essentially pacifist pursuit.


It's driven by a study of history, the psychology of war, leadership etc. - Then stick to the books. (Some ought to. The level of historical knowledge among many wargamers is execrable!)


It's far more involved with painting and modelling. It's an essentially aesthetic pursuit. - Then why do we amass armies and play wargames?

It's an intellectual exercise. -  So are Chess, Go and crosswords. Buy Scabble.


It teaches the horrors of war. - No. Most wargamers' appreciation of the horror of war simply reflects what they think happens in real life when somebody scores a six when firing against a dispersed target. I've never seen a wargamer with a 'thousand yard stare'. As Bill Sherman said, “War is Hell” and the horrors do not limit themselves to the battlefield.


Wargamers are essentially peaceful by nature. - As is the vast majority of the population or we'd be in a state of anarchy. I'd even go as far as to say that most of us could pass for part time library assistants rather than great captains. Then again, Himmler was a failed chicken farmer, so what do I know? However, I know a few ex regulars who are wargamers and, as a group, ex service personnel are generally far more 'war averse' than civilians. By the time politicians have had their two penneth and jingoism has played its part it's usually the civilian population baying for blood, not the forces.

So, is wargaming ethical? Well here I think the answer's “Yes, why not?” It's a game and certainly not a proper simulation. I don't care what the purists think. If it were even approaching a proper simulation we'd all have to give up life and devote out time wholly to what would then cease to be a hobby. Nobody dies and, as one great man said, there are no lead widows or orphans. However, I think there are limits. The Salute 'Nazis' were way beyond the pale for me, but we set our own boundaries. Are suicide bombers now acceptable in games? There was a HUGE outcry over this on PMT a few years ago involving the Stan Johanssen and TAG ranges. I wonder if this is the case now?


Anyway, there you go: food for thought. Do go across to Rob's blog and read the responses; add your own if you like or have a go here, but I think it's a question you ought to think about. If you're not comfortable with it then how will you feel about introducing others to the hobby?


I mentioned TAG just now, so I'll mention them again. A couple of days ago I ordered some more ECW figures from TAG (beautiful) and Perry (not quite as beautiful, but bags of character) and I received emails today advising me that both orders were in the post. That's service. A couple of days before that (during the bank holiday weekend) I ordered some of the new Blue Moon French Napoleonic cavalry from Andy Copestake at OGUK who had just received another bulk order of stuff from the States – this is usually a full day's work to sort out. I was surprised to get those in the post this morning, which means that he was probably even faster in real terms. Can't argue with that for speed of service.

A priest, a rabbi, and a vicar walk into a pub. The barman says, “Is this some kind of joke?”

An Englishman, an Irishman and a rabbi, walk into a pub. The rabbi says “Shit, I’m in the wrong joke!”

As I frequently tell my mates, I'm the master of self control, so the very idea of an impulse buy is anathema to me. Now that lie's out of the way I'll show you a great buy I've been keeping an eye out for for ages and finally cracked last week. I sometimes take Young Henry to the local Petsareusathometogoworld or whatever it's called so he can threaten the rabbits and intimidate the Guinea pigs. While there last week I spotted a Big Giant Head, the sort of which I've been thinking about getting for years. Many see this sculpture as a decoration for the bottom of a fish tank; I see it as an addition to any jungle terrain from any Darkest Africa scenario (Darkest Far East really) to Vietnam by way of WWII. It cost a mighty thirteen quid, but, as one of the assistants let Henry watch him feed live crickets to the lizards (with replays on demand), who could argue? 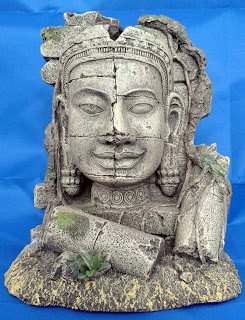 Shakespeare walks into a pub and asks the barman for a beer. “I can’t serve you,” says the barman. “You’re bard!”


As part of the desk clearing exercise (it's like a carrier's flight deck!) I finally got round to polishing off a couple of ACW (Confederate) gun crews and some other odds. The crews are an amalgam of Perry artillery figures and some of the civilian rioters which came out as a group of sets for a 'Gangs of New York'/Draft Riots scenario maybe a couple of years ago. I'd planned this for ages and had the figures hanging around, but no impetus to actually do anything. However, my conscience got the better of me and I finally put together a 'battery' . The conversions were minimal really and mainly consisted of a bit of chopping here and there, a head swap or two and the addition of artillery tools. The painting is the 'get it on the table' block style with an Army Painter Dark Tone wash and the odd bit of touch up work. 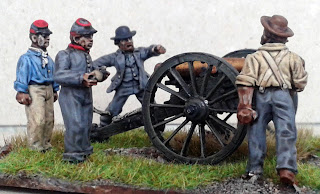 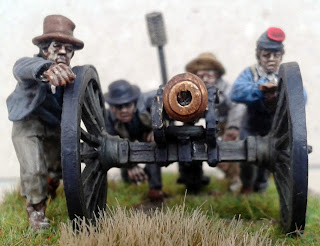 They were originally destined to represent the Pee Dee Light Artillery, AKA Zimmerman's Battery (organized during the winter of 1861-1862 with men from Florence County. After serving in the Department of Norfolk and the Department of North Carolina, it was assigned to R.L. Walker's and W.J. Pegrams's Battalion of Artillery, Army of Northern Virginia. It was then transferred to the Department of South Carolina, Georgia, and Florida. Fought at the Seven Days' Battles, Cedar Mountain, Second Manassas, Chantilly, Harpers Ferry, Sharpsburg, Fredericksburg, Chancellorsville and Gettysburg). However, until I get them the correct allocation of pieces, they'll be anonymous . . . .


A man walks into a pub and asks for a whiskey. The barman says "Single?". The man says "No, I’m happily married, but curious"


I also did a quick chop and change on a figure I assume is meant to represent Bill the Butcher, but who has now become an infantry officer in semi-civilian clothes.

A woman walks into a bar and asks for a double entendre – so the barman gives her one.


To round off the ACW batch I did a straight paint job on what was once a Foundry Confederate artillery officer, but is now a cavalry officer. This time the wash was my old trusted oil paint and varnish formula simply to see if there was any appreciable difference. Although he could do with a little touching up here and there, I think there is a difference in that the staining isn't quite so striking and the mix has got into finer areas such as the coloured seams to the trousers. The formula for this can be found here. 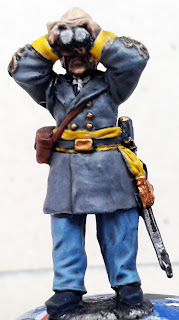 A dyslexic man walks into a bra...

Finally, as you know, I like to mess around with finishes and paints etc. I've finished off four cavalry, but in different methods/styles. The first two are Foundry figures, although the officer has had an arm and head swap. They're straight three shade painting (but the horses don't show it very well in the photo) and are sort of control figures for comparison. 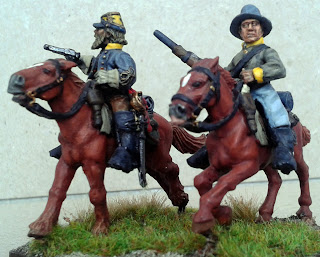 A man walks into a pub and asks the barman "When do you finish serving?" The bar man replies, " when I get to the "g"


The second figure is another Foundry model, but this time: 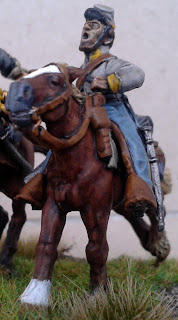 The final figure is a Salute give-away from a while ago and was donated by my old mate Lee (Daywalker's blog). This time: 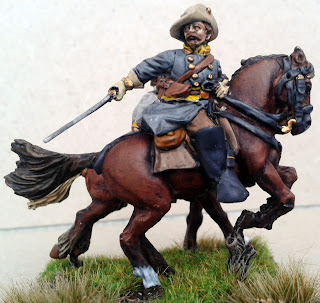 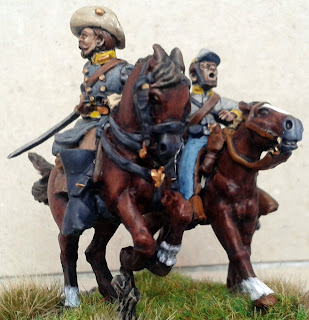 Descartes walks into a bar. The barman asks, “Can I get you a drink?” Descartes replies, “I think not”…and disappears.


And that, ladies and gentlemen, boys and girls is that. See you anon.