Ian Marsh is the owner of Fighting 15's, purveyors of fine wargames figures from a variety of manufacturers in a number scales. He's a thoroughly decent chap who runs a fast service and has been known to remind me when I've forgotten something on an order or there's likely to be some delay etc. I've had most of my AB Napoleonics from him and also some Eureka AWI figures so I can vouch for the firm's efficiency. So why the accolade?

Well, Henry and his mates at 'Miniature Wargames', of Ian's advert for his appearance at the forthcoming Colours show (14th/15th September). In order to try to salvage the situation, MW put out a plea on FaceBook for any bloggers (that's us) to promote Ian's attendance, so here's the ad as it should have appeared: 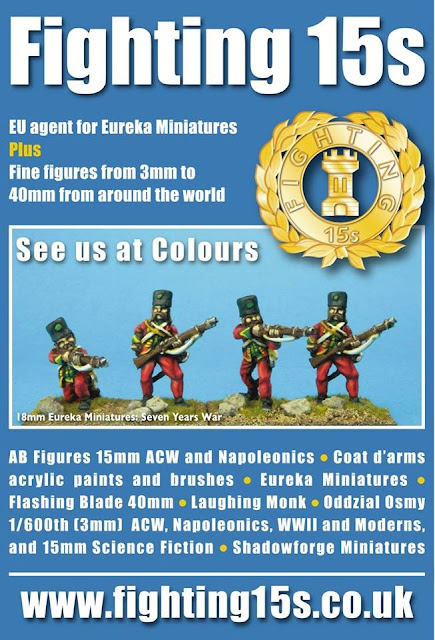 This post originally claimed it was 'Wargames. Soldiers & Strategy' magazine, but I must've had a brainstorm as it was clearly MW! I've just noticed is now, so it proves nobody's actually read it! Sorry Guy!
- August 24, 2013
Email ThisBlogThis!Share to TwitterShare to FacebookShare to Pinterest