This past month or so has been a hell of a maelstrom and much has had to take a temporary back seat. However, I've continued my desk clearing exercise and made slow, but steady progress. I really did intend to blast through the figures that've been hanging around for a while, but, time constraints aside, some of them are boring beyond belief and others belong to projects that stalled when Adam was a lad. So the revised the plan is to adapt Ockham's razor and cut the crap. I'm skipping the boring/redundant stuff and moving on to figures I'll actually use, which means a very mixed bag to come.
Naturally, as with all of my undertakings, I discovered I was approaching drought status with some of the colours I was using, so went off on a replenishment exercise. The need for some replacement paint leads me to this posting's rant: it's O.K., it's a minor one!
Bloody colour charts pasted all over the interweb are a complete waste of time!!! I accept that, with all the potential variations to do with reproduction and screens etc., there will always be some variation and I'm not naive enough to take these charts as gospel, but they might as well produce the in black and white. So, imagine my delight when the bottle of medium blue I thought I'd ordered arrived and turned out to be a vapid pale blue which is about as much use to me as putting an each way bet on a one legged man in an arse kicking contest. As I said, they're all bad and some are more badder than others(!), but, to be brutally honest, I've found good old Vallejo to be the worse of a pretty poor bunch. So, shape up!
Oh yeah, anybody see the brouhaha over the naughty Perry twins last month? They had the audacity to produce 3 ups of their forthcoming 'new project' and they didn't suit everybody! In part, it's the Twins' own fault for starting a hare running earlier in April by hinting very broadly about the new line of figures which they intended to preview at salute. So, wargamers being wargamers, there were wet dreams aplenty as excited men men huddled in groups or stood alone at bus stops, mumbling about what the new wonder figures could be. Sadly (unsurprisingly?) there were some disappointed fan boys, some of whom simply couldn't describe the depths of their despair at the future release of some 8th Army troops and their Afrika Korps opponents. Others were incensed that anyone should see fit to criticise the Perrys. Good fun all round – for me anyway – and it just goes to show that, if you don't tell the kids what they're getting for their birthday, the fertilizer will hit the air-conditioning if they don't get what they thought they were going to. And then they buggered off to New Zealand on a jolly! Have these men to sense of responsibility?
Last week I sold a kidney and ordered the new Black Powder supplement “Pikeeeee and Shotteeeeeee” (why do they insist on trying to imitate the period even in the bloody book title?). It arrived yesterday, so I've only had a quick skim though it, but it's very much in keeping with the BP stable. They're not going to be everyone's cup of tea and they appear to have some unique approaches to dealing with the formations of the period, but they do look promising. Of course, they also have to potential to become complex, so it's up to the user(s) to put the brake on when they think they're reached capacity and are likely to kill off the playability element. However, nice eye candy, but at an eye watering price, though thirty quid for a set of rules seems to be the going rate these days. I bet Don featherstone's spitting blood!
Anyway, enough of that. I've posted some of the more interesting (to paint, anyway) figures. Again, the bases are as far as I go with decoration.
This first figure is an odd Yankee brigadier who’s a Perry metal on a Perry plastic ACW horse. Straightforward stuff. 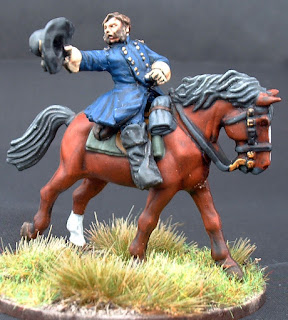 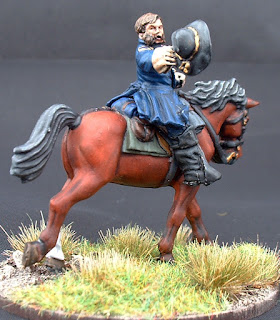 This one is a front Rank Dutch cavalry officer who's now become a generic 'German' brigadier to cover off the smaller states in the Allied army. The uniform is purely conjectural. 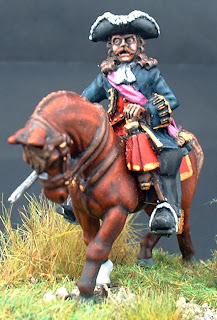 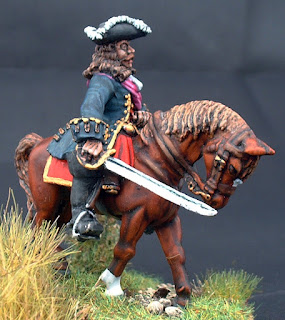 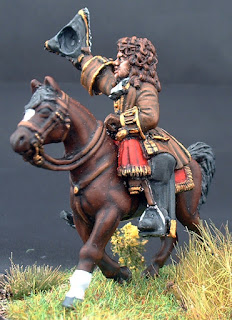 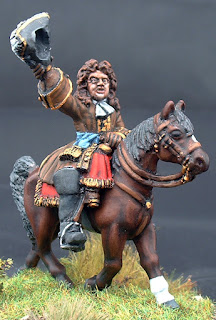 All these figures appeared during my recent loft reorganisation when we were doing the electrics, but the best of all is the last figure, below. He's an old Foundry (possibly Guernsey Foundry vintage) from the days before the advent of the dreaded packs, when the figures were all sold loose. His several compatriots are doing service down in Kent now, so he's the only survivor, but has been elevated from a humble cavalry officer too brigadier of Louis XIV. 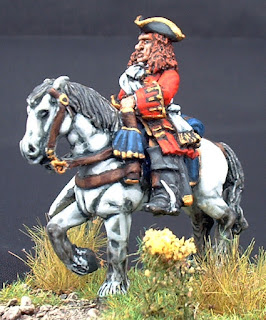 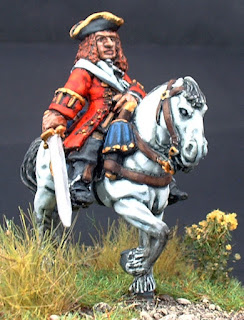 The little vignette below is a Calpe command set (no, not sure which one) I've done for a mate who's under the cosh to get about half a million figures done in just over five minutes. Nice enough little set, but the horses are a pig to rope tpgether. Personally I'd have nailed their hooved to the ground . . . 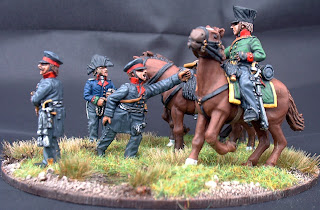 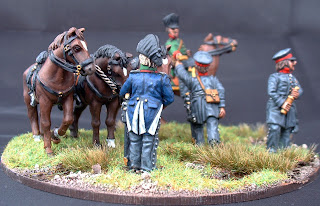 Finally, a base of some Germans (the Swabian Baden–Baden regiment). The point of interest is that they're and experiment, painted in what I'm going to call the Saxon Dog method: blocked in colours; Army Painter Strong Tone; highlight as you fancy. Definitely an assembly line method of painting, but, overall, much faster then the, say, Dallimore method and certainly comfortably good enough for the rank and file of an army. 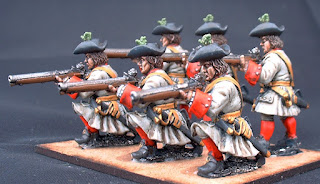 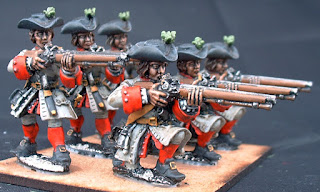 Yesterday I was over at my mate's place road testing some 'back of an envelope' horse and musket rules – very much an old school approach. The game was a stylised refight of the southern end of the battle between the Prussians and the Austrians outside Prague in May 1757. Great game and certainly successful as a tester. Naturally, I lost (even being the Prussians!), but we had a great time of it. I've attached a sneak shot just for interest. 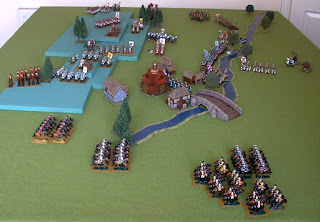 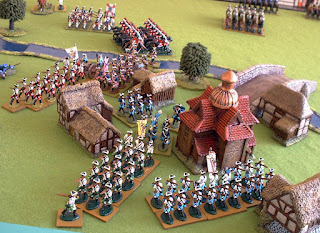 This may well turn into a campaign with its own blog (or whatever) so we can report on progress to various people and lie outrageously about our exploits and general bad luck and crappy dice.
- May 11, 2012
Email ThisBlogThis!Share to TwitterShare to FacebookShare to Pinterest
Labels: American Civil War, Painting, War of the Spanish Succession, Wargame