This must be something of a record, being the third consecutive entry about painting. That's a lie really as you'll see later. However, I've continued my desk clearing exercise and am actually achieving bits here and there. The photos below are of three odd (in the nicest possible way) command figures from my stalled 30 Years' War project of a couple of years ago. I've got more stalled projects than Soft Mick, but I'm now in control of my habit, despite what detractors may say.
Anyway, they're painted up as non descript generals that can be used as brigade commanders (should that be tercio?), but the point is (apart from the fact that I've forgotten to paint in the horses eyes) is that they were knocked off quite quickly, the real time saving being the reversion to the old fashioned 'oil paint wipe' technique for the horses. This means that, allowing for a short delay while the oil paint dries, you can knock off whole regiments of cavalry in a far less time than trying to paint and highlight with acrylics.
The bases are as far as I go with decoration. There's a (more or less) high angle view of each figure to give you a decent view of the base. It's an old truism that if you've got a decent figure, don't hide it on an over-done base and if you've got a pretty poor figure, use a highly decorated base to distract the viewer. It's true for a lot of things in life, painting leads is just one of them.
I've seen bases that are works of art, but with beautiful figures on them that you can't see properly or maybe barely notice at first. You'll know the sort of thing I mean. So, as I don't like the third general figure much, I thought I'd over-do his base to prove the point.Unfortunately, I only got so far and just couldn't be bothered. So much work for nowt really. The flowers on these bases are my only concession to the current fashion of basing figures so they look as if they're marching through a garden centre.
What to do with them? For a while they'll probably stand in as brigadiers for my embryonic War of the Spanish Succession project – you can never have too many command figures. After that they'll probably retire into obscurity rather than line the pockets of the eBay shareholders. 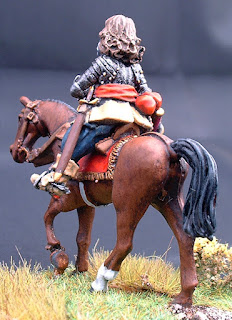 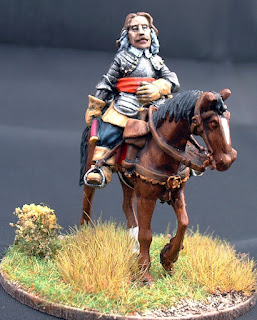 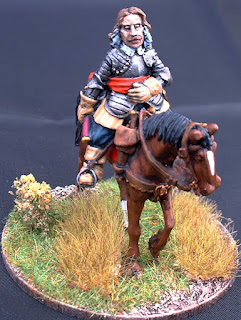 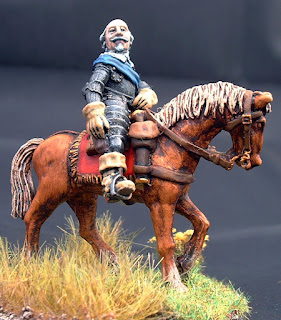 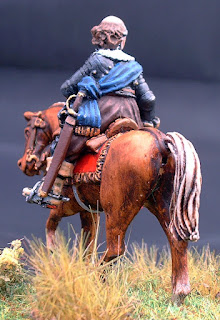 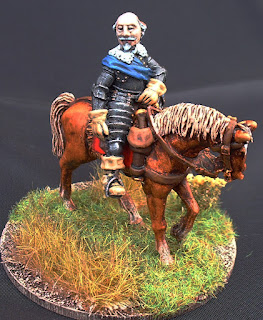 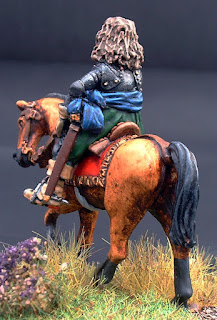 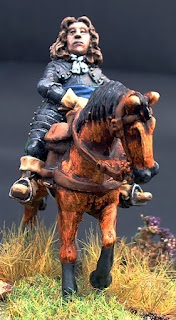 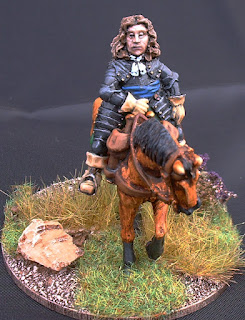 The figures are all Bicorne, from their ECW range, and paint up pretty easily. The range doesn't seem to have expanded for a while and that may be because the sculptor of the range, Nick Collier, now does work for The Assault Group (TAG). However, the figures from these two companies are compatible and the Bicorne ECW  range is pretty big anyway.
Now then, mobile phones. I've been with Virgin Mobile for a while now and never had any problems with them. I was contacted a couple of months ago and reminded that my contract was due up: did I want to upgrade? As it happens, my then current phone was a pain – a slide cover that took what seemed like ages to do anything on and, as my kids send texts all the time, it took me a lifetime to reply. So, I got myself a Blackberry Curve for thirty bob a month less than I was already paying and with a bigger chip than was standard. Well chuffed was I . . . until last week when, after only six weeks' use, the damned thing died on me. To cut a (not really) long story short, I've had the phone replace with a reconditioned one (because I'd had it for more than a fortnight!!!!) and the charger they sent with the replacement was broken. The replacement charger for the replacement charger arrived this morning and it's the wrong type. The good people at Virgin Mobile asked if I'd buy one myself and they'd credit my account. I wasn't too impressed with that suggestion – the second replacement arrives tomorrow.
Now, I can be a bit short tempered at times and I can certainly swear better than anybody I know (and I was in the navy too), but I was reasonable and as pleasant as anyone could be in the circumstances. However, I've still ended up with a second hand phone and an assortment of useless chargers. What I did discover during the course of the conversations with VM is that they use Blackberry's own people to repair the phones and they don't seem to have any proper control over them. The quality aspects of the equipment has been questionable for a while (yes, I know), but, it seems the quality of service is about the same level. VM weren't too happy when I called them again this morning.
I thought I'd share this with you to give you a snapshot of one incident in a market which is supposed to be saturated and in which companies are reportedly cutting each others' throats to get business and to retain custom. I've had a trawl around a few consumer forums (and the chat rooms of some mobile providers' sites) and, sadly, the situation seems to be the same all over.
See; I told you I'd lied about the painting . . .
- March 27, 2012
Email ThisBlogThis!Share to TwitterShare to FacebookShare to Pinterest
Labels: Painting, Thirty Years' War