This is the first of a couple of entries about painting – now there's a surprise eh? However, this is something I was pondering over while I was painting up a few figures to clear the painting desk of 'quick jobs' and experimenting with another idea from a fellow blogger. More of that anon, but I got to thinking about the lead pile and ways of getting it down other than by ditching it!
Years and years ago I used to use a variety of washes to add shading quickly. The sculpting wasn't anything like that standard of current figures, so fantastic detail wasn't all that important, especially as 25mm meant just that, before the 'herioc' 25's and now 28mm (which are really about 32mm) of today. Nevertheless, the part of figure painting most people seem to have varying degrees of difficulty with is the flesh and there's an easy solution. The answer is to give the figure a decent base coat of acrylic flesh colour and then over-wash with (very) thinned oil paint. There's no secret formula to this: any flesh or pale brown or sand colour will do for the basecoat and the best oils to use are sepia and burnt umber. There are only two things to bear in mind:
So, a Viking would need a pale basecoat with a sepia wash and so on. By the way, this is exactly the same principle as used on oil 'wash and wipe' horse painting. If yo want to add 'seven o'clock shadow', then give the appropriate are a wash with thinned paynes grey.
Now then, this is obviously suited to an assembly line approach because the oil wash will take longer to dry than acrylic ink, but the basecoat soaks up much of the oil and as the wash is thinned anyway, there isn't much oil to soak up anyway. However, I used to do a batch of about 50 figures at a sitting (not long at all) and then leave them for 24 hours. The actual drying time is much less than this, but it fitted in nicely with real life.
There are many variations to this method, the most obvious being to give the face some basic shading before the oil wash is applied and use it to pull it all together, so to speak. You can also add some highlights after the oil wash has dried to give more emphasis to the face – you're probably going to want to paint in the bottom lip anyway. Each variation gives its own 'look' to the figure , but I think the key thing to remember is that the oil wash is as flexible as you want it to be. It can be used by many styles of painter and can certainly cut down time otherwise spent slavishly trying to get that nicely shaded look. David Imrie uses a variation of this with Army Painter Strong Tone to cover the whole figures once he has blocked the colours in and then highlights over the top. Same principle; different medium.
I'l be using this for my squaddies from now on (unless I get bored again) , but I'll still have the freedom (and the time) to get fancy with command figures. In fact I'll probably take the David Imrie approach now and again for some units and get more involved with others. That's the kind of mentalist I am.
Anyway. I've uploaded some photos of heads from some Vietnam era Americans to show the effect: 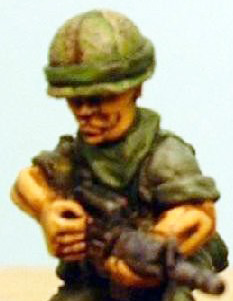 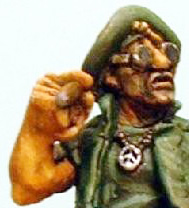