This is the second entry about painting – there are more on the blog, so I suppose I should say “for today”. In between domestic stuff, electrics and being a professional grandad, I've been was painting figures to clear the painting desk. It's not a desk as such, more a mobile scene of chaos, but there's a clutch of figures that've been hanging around for a while (absolute ages in some cases) which need to be killed off to allow progress with newer stuff to proceed with a clear conscience – and be able to find stuff! Just to give a clearer picture, this log jam of figures isn't that big really, but it's built up over a while because of a combination of insufficient time, idleness, a butterfly mind and an overactive imagination. Nevertheless, the upshot is about two hundred and odd figures primed and waiting to be painted. I must be crackers . . . .
Anyway, a few of these figures were part of an experiment with an idea from a fellow blogger: Olddorg – see Metal Mountain in the list of blogs on the left. He's got a very good method of preparing the figures for painting by (in a nutshell) undercoating in a light brown acrylic paint, which is then over-painted in burnt umber oil paint. This in turn is then wiped off to reveal what might be described as a pre shaded figures that shows all the detail and gives a great indication of the shades and highlights for painting. It's also a decent key for the subsequent paint. The figure is then finished off in the usual two or three (or more) layers of acrylics. Dead simple and really effective if, like me, your next stop is to skip the optician and buy the guide dog. So, do have a read of Metal Mountain and have a go yourself.
Now, I have to confess that I have a problem with Olddorg's method in that virtually all shadows are really grey, not brown, so I wanted to try alternatives to his scheme. I opted for two colour combinations to see if they made any difference: grey primer with ivory black oil paint and white primer with burnt umber oil paint. The white/brown scheme would give more contract than the light brown/brown scheme, while the grey/black combination would give (to me) proper dark shadows and be better for blues and greens etc. That was the theory anyway and it seems to have worked during the painting process. However, the end results are difficult to differentiate. Because you paint over most of the figure anyway, the brown option is really dark brown in the deep recesses, so looks more or less black anyway. However, I do tend to use thinner paint than most people and the black certainly did allow for the acrylics to show greater depth of shade. It's all a question of personal preference, so it's up to you.
O.K., now the evidence. I've uploaded two sets of figures; one for each scheme. The first three figures are done with the white/brown combination: 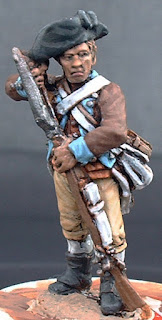 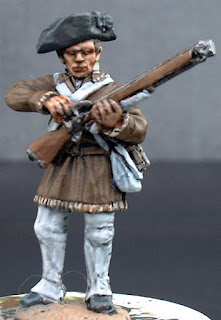 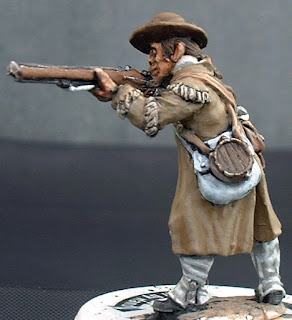 The nest two are done with the grey/black scheme: 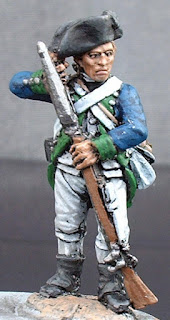 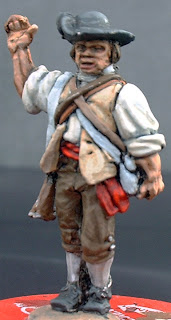 Personally, I'm not bothered and I can happily live with both. I would use Olddorg's brown on brown, but I haven't got any brown enamel and I might as well continue the way I have. I've also got a couple of mounted figures on the go using this system for man and horse and I'll post them this week sometime. This 'oil wipe' method of painting horses is donkey's years old, dating back at least to the days of Peter Gilder, so for me, it's a step back in time because I used to do all my horses that way. However,I'm not just being nostalgic; it's also a very fast way of painting horses and, with a little practice, can produce good results in more realistic horse colours. Anyway, more of that another time.
- March 11, 2012
Email ThisBlogThis!Share to TwitterShare to FacebookShare to Pinterest
Labels: Painting