A recent short discussion on the Mongrel prompted me to put up some 15's that have been painted in slightly different methods (if you can paint in a method!)  to show the effect of the options for shading. Put very simply, you know the Army Painter stuff? Well for years and years I've had my own formula which is Ivory Black oil paint mixed with non yellowing gloss varnish and let down with while spirit. Mix it good and thin, splash it on the figure and it shows plenty of detail and shading. The details on the figures is pretty easy to pick out just like on a 28, but it take less time, but often aren't worth the bother. Field officers and commanders get a more refined treatment and are actually properly painted and shaded, but the rank and file get blocked in and washed. Course, this depends on the uniform colour as some need highlighting, but, generally, they're fast as lightning compared to 28's.

A lot also depends on the sculptor in question. AB are hardest to paint because of the temptation to go into fine detail on every figure, but they wash just as well as anybody else's. Probably the best examples of good figures for washing are the impending Napoleonic ranges from Blue Moon. Not as finely detailed as AB, but more deeply sculpted with exaggerated relief on cross belts and the like. I need to finish my Russian division and their early Russian types will do the job nicely - as well as being less than half the price of AB's range.
So, you can get as much detail as you feel you want/need on the figures and they look fine without having to paint in all the piping if you don't want to. My French have their lapel and turnback piping, but only the light infantry have collar piping. When I do the foreign regiments I've planned, only the ones with distinctive piping will get it. For example, the Swiss battalions will need piping because they had it in  pretty strong contrasting colours, whereas the French line don't get collars piped and some don't even get their cuffs piped. As an aside, hussars of any nationality are surprisingly easy to paint because of their frogging - an easy dry-brushing job.

Now then, I bought some Dark Tone Army Painter and it's pretty much like my own oil paint formula, except mine doesn't cost 17 quid. I've done some figures in this (but I let it down to minimise the staining on raised surfaces and improve its lining qualities) and some in my old stuff for comparison. posted below. I have to confess that  I sometimes do a little highlighting, but I tend to keep this to a minimum with units just to save time.
First off are some brigadiers who've been painted 'properly, without any washes The photos are a bit bright so you can't see all the shading properly : 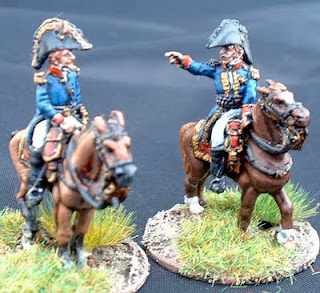 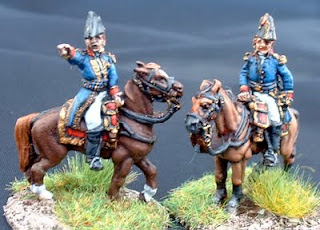 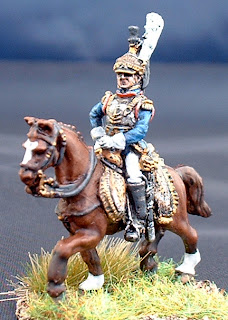 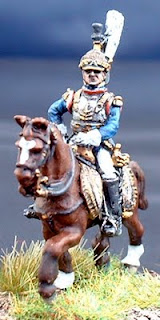 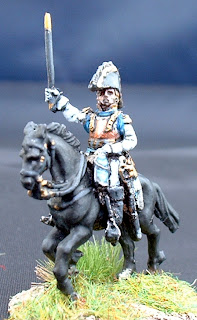 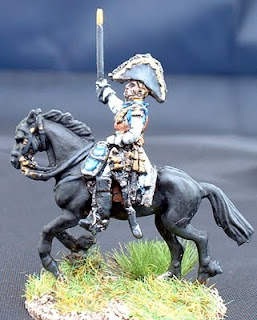 These are all AB: the infantry brigadiers are just the ones from last time based.
O.K., now some Saxon Infantry who've been essentially dry brushed over black undercoat with a few edges tidied up. They've had the 'oil paint wash' a, followed by matt varnish. They're actually some old French infantry I had knocking around, but who's to know the difference? 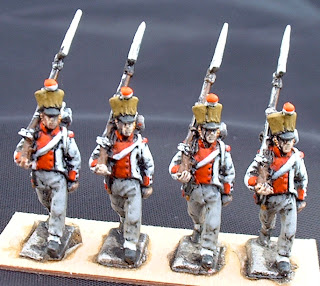 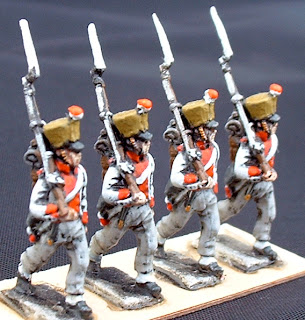 Next an Austrian staff officer and an Austrian battery, both done as above, but the horse had a little dry brushing and the gunners did too here and there: 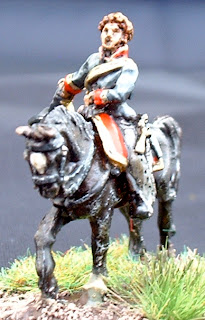 And now, ladies and gentlemen, without the use of safety nets, some Examples from the French 1st Hussars. However, before reading on, decide which have been dome with the 'oil paint wash' and which with the thinned Army Shader Dark Tone. All the horses have been shaded to some extent beforehand, but nothing too drastic: 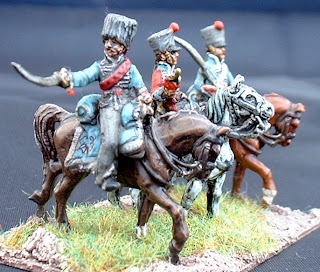 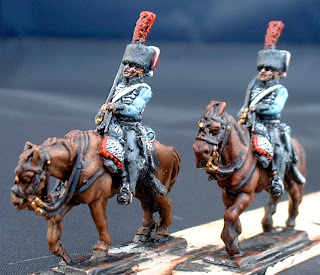 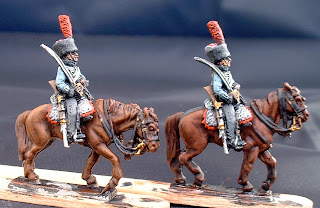 The elite company troopers have the Army Shader on and the command group has the 'oil paint wash'. I can't see that there's much difference other than the elite company figures are about fifteen years younger (and a damn' site more expensive!) and so are better castings.
I've also bought some black wood stain (ebony, I think) and some mahogany wood stain and I'll do some figures in those too for comparison. When I've got the comparisons I'll bung them on here blog so people can see and decide for themselves which they prefer - unless I forget . . . .

Oh yeah, while I'm at it, I bought some Coat d'Arms supposedly 'dried earth' shade basetex stuff a couple of weeks ago and it was a disaster. Coverage is crap and it dries with a distinctly green hue. I had to over-paint the whole bloody lot - not impressed. You can get the original Basetex stuff from Trevor Holland at Coritani (nice bloke), but I think I'll stick to my tried and trusted sharp sand over PVA. It takes a little longer to finish the bases, but at least you can control the colours.
- September 13, 2011
Email ThisBlogThis!Share to TwitterShare to FacebookShare to Pinterest
Labels: Napoleonics, Painting